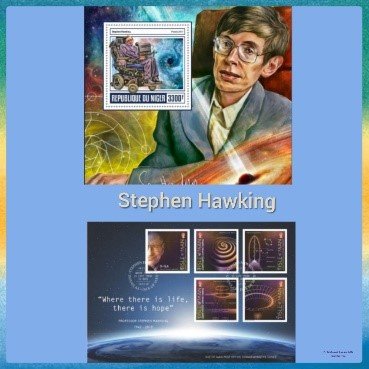 🔹Hawking was born in Oxford, England. His parents studied at the University of Oxford – His father was a medical researcher and mother worked as a secretary for a Medical Research Institute.

🔹Even from childhood, Hawking had a passion for Science and the Sky. So, he chose to study physics at Oxford University and graduated in 1962. He further did his Ph.D. in cosmology at Trinity Hall in Cambridge University.

🔹Unfortunately, he was diagnosed with Early-onset slow-progressing form of Motor Neuron Disease known as Amyotrophic Lateral Sclerosis at his young age of 21 years, which gradually paralysed him over the decades.

🔹Later, he became wheelchair-bound and dependent on a computerised voice system for communication, which he operated with his cheek muscle.

🔹Hawking was researching upon the Basic laws which govern the universe. He primarily focused on the field of Einstein’s General Relativity and studied Quantum gravity and Quantum mechanics.

🔹After his thorough studies, he revealed that Astrophysical Black holes should not be completely black and emit radiation and finally explode – which is now known as Hawking radiation.

🔹His immense contributions in the field of Astrophysics made him earn many exceptional honours. In 1974, he was elected as Fellow of the Royal Society and he was one of the Youngest Scientist to become a Fellow.

🔹Afterwards, he became a Professor of Gravitational Physics at Cambridge in 1977 and then got appointed to Cambridge’s Lucasian Professorship of Mathematics – the post was once held by Sir Isaac Newton.

🔹Furthermore, Professor Stephen Hawking received thirteen honorary degrees. Also, he was the recipient of many awards, medals and prizes, most significantly the Fundamental Physics prize (2013), Copley Medal (2006) and so on.

🔹Moreover, he authored about 15 popular science books, which helped make science accessible to everyone. His books, particularly A Brief History of Time (1988), became a blockbuster successes – selling 10 million copies.

🔹Subsequent to his fabulous achievement, he died at the age of 76 years, after struggling with the Motor Neuron Disease for 50 years.

🔹Actually, Hawking was born on the date of Galileo’s death and died on Einstein’s birthday.

🔹As Hawking’s history was inspiring, part of the life story was portrayed as a film named The Theory of Everything in 2014.

🔹After his life, his 22 personal possessions including his Doctoral thesis and his wheelchair were auctioned and the money was shared between two charities – The Motor Neuron Disease Association and the Stephen Hawking Foundation.

The Master of the Universe