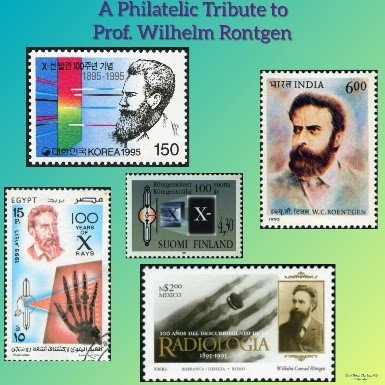 🔸Wilhelm Rontgen was a Professor of Physics at Wurzburg University, Germany.

🔸Through series of investigation conducted on 8th November 1895, Roentgen created a new ray and called as rays X for unknown.

🔸Subsequently, he took the X-ray photographs of metal objects and took the picture of his wife Anna bertha’s left hand with wedding ring.

🔸On seeing the X-ray image, Anna became horror-struck and exclaimed – “I have seen my death!“

🔸In fact, his discovery of X-Rays created a great revolution in the fields of physics and medicine.

🔸In recognition of his incredible discovery, Prof. Roentgen was honoured with Rumford Medal of the Royal Society of London in 1896 and received the first Nobel Prize in Physics in 1901.

🔸Later, Prof. Rontgen donated his entire prize money to promote scientific studies and moreover he strongly refused to patent his own discovery.

🔸Unfortunately, Prof. Rontgen was affected by colon cancer and died at the age of 78.

🔅 Element number 111 was named roentgenium (Rg) in his honour.

🔅 International Day of Radiology is celebrated annually on 8th November – the anniversary of the discovery of X-rays.

A Scientist Who Made the Invisible Visible