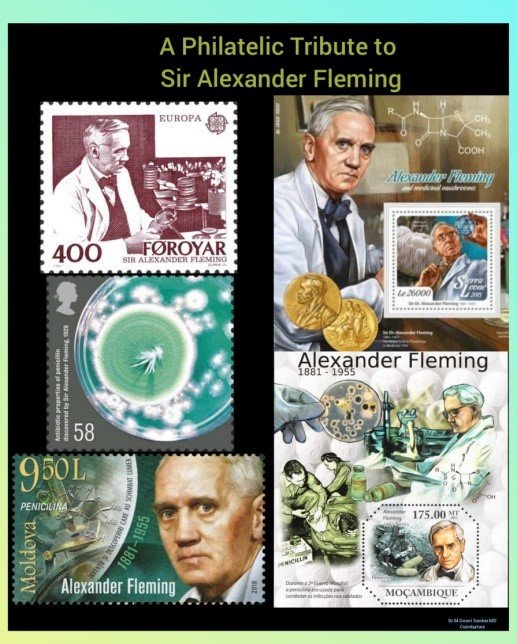 🔹 Alexander Fleming was born in a small town in Scotland. His father was a farmer but unfortunately, he passed away when Alexander was seven years old.

🔹After completion of schooling, he worked in a shipping office till the age of 20 years. By the guidance of his physician brother, he then joined to study medicine at St Mary’s Medical School, London graduated with distinction in 1906.

🔹After his studies, he joined as an assistant bacteriologist to Dr. Almroth Wright, who was a pioneer in vaccine therapy at St Mary’s Hospital.

🔹In 1928, he got appointed as a Professor of Bacteriology at the University of London. Simultaneously, he involved himself in investigating the antibacterial properties of nasal secretions and successfully discovered an enzyme called “Lysozyme.”

🔹Subsequently, he was investigating the properties of Staphylococcus in his laboratory.

🔹On September 3, 1928 after returning from his August vacation, he found that one of the Petri dish containing staphylococcus was unknowingly left open and got contaminated with fungus.

🔹He further observed that colonies of staphylococcus immediately surrounding the fungus were destroyed. Whereas, the colonies farther away was normal. Thereby Fleming remarked – “That’s Funny.”

🔹He then identified the fungus as Penicillium notatum and named the mould juice as “Penicillin” on March 7, 1929.

🔹Furthermore, he investigated the anti-bacterial properties in many organisms and published his discovery in the British Journal of Experimental Pathology in 1929. But only little attention was paid towards the article.

🔹Thereupon, Sir. Ernst Boris Chain studied and proposed the molecular structure of penicillin. He involved Dr. Howard Florey to revisit the work of Fleming and carried out animal experiments and the first ever clinical trials in Oxford in 1941.

🔹Meanwhile, Dr. Norman Heatley, a biochemist in the Oxford team had developed a special technique to purify penicillin and produced sufficient quantities to combat bacterial infection.

🔹The well known lines about the creation of Penicillin… Without Fleming, no Ernest Chain; without Ernest chain, no Florey; without Florey, no Heatley; without Heatley, no Penicillin drug.

🔹Eventually, Sir Alexander Fleming, Dr. Ernest Boris Chain and Sir Howard Florey were jointly honoured with Nobel Prize in Physiology or Medicine in 1945 for the discovery of Penicillin and its curative effect on various diseases.

The Physician Who First Discovered the Life Saving Drug