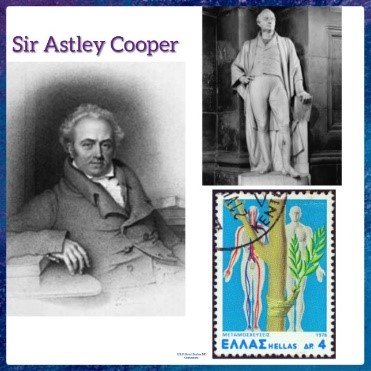 🔸Astley Cooper was born in Brooke, district of Norfolk, United Kingdom. He took his apprenticeship training at the age of 16 years under the expert surgeon Henry Cline at St Thomas Hospital, London.

🔸Cooper also devoted himself to the study of anatomy and had the privilege of attending the lectures of John Hunter, who was a celebrated anatomist and surgeon of his days.

🔸After the successful completion of his training, he got appointed as a Demonstrator of Anatomy at the same hospital and later he became a Lecturer in Anatomy and Surgery.

🔸Indeed he had a great passion for dissections. Soon, he was appointed as a surgeon at Guy’s Hospital, London. Where he served for a period of forty-two years.

🔸During his service, he made historical contributions to otology, anatomy and pathology of the mammary glands and testicles, and the pathology and surgery of hernia.

🔸He further extended his contribution to the field of Vascular Surgery. He was the first to demonstrate ligation of the carotid arteries in dogs, as well as, proposed the treatment of aneurysm by ligation of the vessel.

🔸As a skilful surgeon, he ligated the external iliac artery for a femoral aneurysm during 1808 and also ligated the aorta for an iliac aneurysm in 1817.

🔅 Cooper’s Fascia – A covering of the spermatic cord.

🔅 Cooper’s Stripes – A fibrous structure in the ulnar ligaments.

🔅 Cooper’s Ligaments – The suspensory ligaments of the breast.

🔅 Cooper’s Testis – Neuralgia of the testicles.

🔸Furthermore, he published several works such as:

🔅 Illustrations of Diseases of the Breast (1829)

🔸Consequently, his enormous contributions earned him the recognition – a Giant of Surgery – a celebrated teacher – Surgeon’s Surgeon. Moreover, he had extended his hands-on training to more than 8000 surgeons during his life time.

The Prince of Surgery