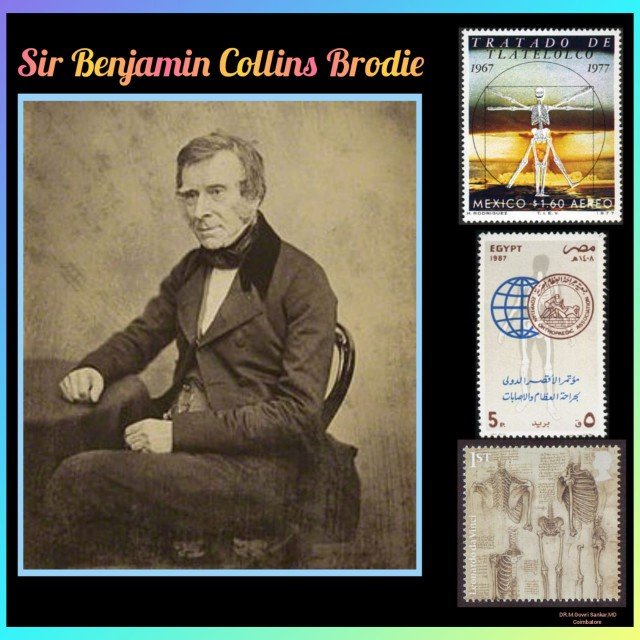 💠 English Surgeon
💠 One of the Founder of Modern Orthopaedic Surgery

🔹Brodie was born in Wiltshire, England. His father was a priest. He learned Greek and Latin prior to learning medicine.
🔹At the age of 18, he joined at St Bartholomew’s hospital, London and studied medicine. There he was fascinated by the collections of anatomical and pathological specimens of famous surgeon John Hunter.
🔹After his studies, he began his career as a Demonstrator of Anatomy and became a Surgeon at St George’s Hospital in 1808, where he served around thirty years.
🔹In fact, Brodie played various roles in medicine as a researcher and surgeon.
🔹Moreover, his treatise on “Pathological and Surgical Observations on the Diseases of the Joints” became most significant and widely acknowledged in 1818.
🔹Further this volume had led the surgeons to adopt more of conservative measures in the treatment of diseases pertaining to joints and consequently reduced the number of amputations and saved many limbs and lives.
🔹His Eponyms…
🔅 Brodie’s Abscess – Chronic metaphyseal abscess of long bones.
🔅 Brodie’s Disease – Hysterical pseudofracture of the spine.
🔅 Brodie’s Knee – Chronic inflammation, or chronic hypertrophic synovitis of the knee joint.
🔅 Brodie’s Disease of the Breast.
🔅 Brodie-Trendelenburg percussion test – Test for incompetent valves in superficial veins.
🔹He was elected as President of the Royal Society and praised as the first surgeon who held this post.
🔹In 1843, Brodie introduced the “Fellowship Examination” at Royal College of Surgeons in order to improve the education and standard of surgeons.
🔹In order to honour Brodie, Dr. Henry Gray dedicated his work Gray’s Anatomy to Sir Benjamin Collins Brodie in the year 1858.

An Outstanding Surgeon of 19th century