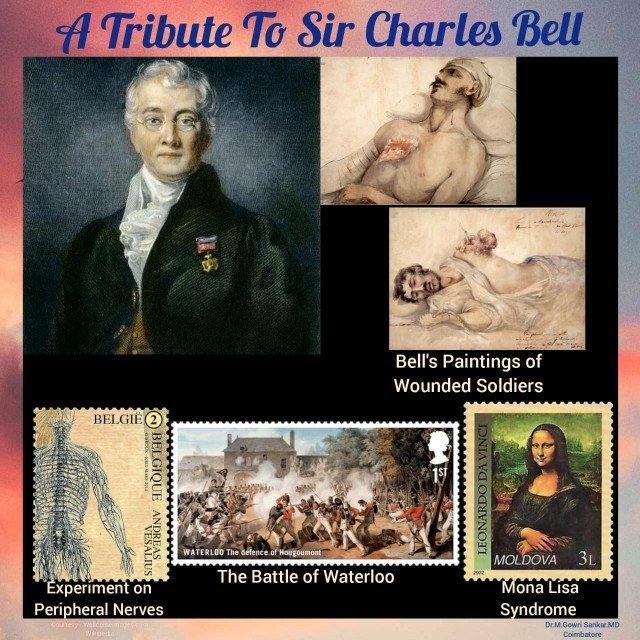 🔸Charles Bell was born in Edinburgh, Scotland. He lost his father at his young age of 5 years and when he growing up, he was greatly inspired by his mother.
🔸In fact, he followed in the foot steps of his elder brother Dr. John Bell and enrolled to study medicine at Edinburgh.
🔸While a medical student, Charles Bell published a dissection book explaining the anatomy of the human body, under the guidance of his brother. He published the book with his own extraordinary anatomy illustrations.
🔸After completion of his medical graduation in 1799, he became a Fellow of the Royal College of Surgeons of Edinburgh. There he got trained in surgery as well as in anatomy.
🔸Further, his passion in anatomy made him write the first textbook of anatomy for painters “The Essays on the Anatomy of Expression in Painting” in 1806.
🔸Subsequently, Dr. Bell moved to London to gain more academic knowledge. Soon, he started a private school of anatomy and then took over the School of Anatomy, which was founded by William Hunter.
🔸There, he presented himself as an excellent teacher by conducting his research on the anatomy and the function of the nerves.
🔸During the battle of Waterloo in 1815, Dr. Bell served in the British army as a war surgeon and took care of the wounded soldiers. Simultaneously, he documented his experiences through his watercolour paintings.
🔸Actually, his anatomical watercolour paintings reflected the harsh reality of war and the 19th century surgery. Today his paintings are exhibited at the Royal College of Surgeons of Edinburgh.
🔸He had a distinguished career in teaching and clinical practice in London. He served as a Professor of Anatomy and Surgery at the Royal College of Surgeons of England and finally became the Professor of Surgery in the University of Edinburgh. He remained there until his death at 68 years of age.
🔸In addition, he made some key physiological contributions. By his experimentation, he described that individual peripheral nerves actually contain nerve fibers with different functions and emphasized that nerves conduct in only one direction.
🔸Moreover, he described the anatomical basis of facial expressions and also demonstrated that the 5th cranial nerve is of sensory importance of face and controls the muscles of mastication, whereas the 7th cranial nerve principally controls the muscles of facial expression.
🔸Based on his experimentation on touch, movement, position sense, he actually described the muscle sense as Sixth sense.
🔸His Eponyms…
🔅 Bell’s nerve – Posterior or long thoracic nerve of Bell described by him in 1821
🔅 Bell’s paralysis – Unilateral, idiopathic paralysis of facial muscles was first described by him in 1827.
🔅 Bell’s phenomenon – Upward rotation of the eyeball as the lid closes in Bell’s paralysis
🔅 Bell’s spasm – Involuntary twitching of the facial muscles
🔅 Bell-Magendie law – Bell demonstrated the function of spinal nerves, that anterior spinal nerve roots contain only motor fibres and the posterior roots only sensory fibres. Bell’s observation was experimentally confirmed and fully elaborated 11 years later by the French Physiologist François Magendie.
🔅 Mona Lisa syndrome – Facial muscle contracture that develops after idiopathic Bell’s palsy during pregnancy.
🔸Apart from his medical career, he was a prolific writer – he published a series of anatomical works by his own fine artistic drawings. They are…
🔅 A System of Dissections (1798)
🔅 The Anatomy of the Human Body (1802)
🔅The Anatomy of the Brain (1802)
🔅The Anatomy of Expressions (1806)
🔅An Idea of a New Anatomy of the Brain (1811)
🔅A Dissertation on Gun-shot Wounds (1814)
🔅 A Series of Engravings Explaining the Course of the Nerves (1816)
🔅Treated Wounded Soldiers after the Battles of Corunna (1809) and the Battles of Waterloo (1815).
🔸Dr. Charles Bell was recognized as a prolific medical writer, a brilliant medical researcher, renowned medical teacher and a skilled artist. He was Knighted in 1830.