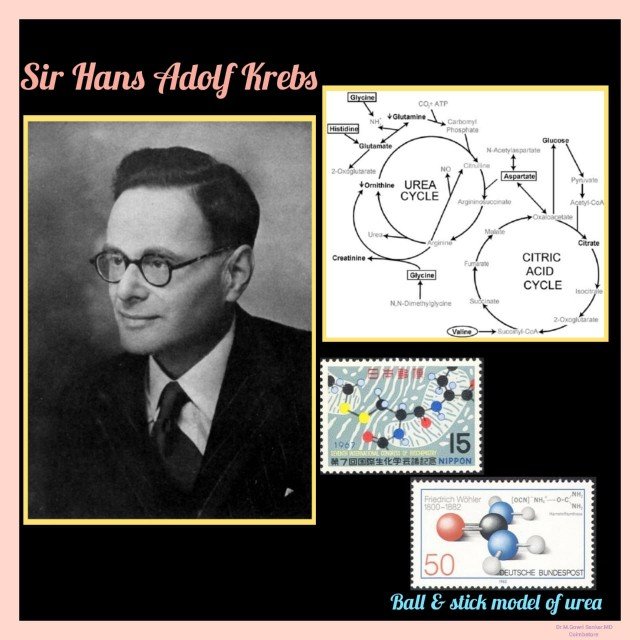 🔹Krebs was born to a ENT surgeon in Germany. As he was inspired by his father, he joined to study medicine at the University of Freiburg.
🔹Subsequent to his medical education, he got trained in biochemistry at the Pathological Institute of the Charite Hospital, in Berlin. Then he earned his MD degree from the University of Hamburg in 1925.
🔹He was fascinated about medical research so he joined with Prof Otto Warburg as his Assistant at the Kaiser Wilhelm Institute for Biology.
🔹While working in Otto Warburg’s laboratory, he learned about manometry, which is used to measure oxygen consumption of tissue slices and it supported for the precise investigation of biochemical pathways in animal tissues. Later, he utilized the manometry to discover Krebs cycle.
🔹Furthermore, he continued his research along with his student Kurt Henseleit at the University of Freiburg on liver function in  mammals and analysed how the ammonia gets converted into urea in liver cells.
🔹Based on his investigation, he published the Ornithine cycle of urea synthesis, which is the metabolic pathway for urea formation. Today, we call it as the Urea cycle or Krebs-Henseleit cycle.
🔹In the year 1933, he was forced to move to London due to the rise of Hitler’s Nazi Party in Germany.
🔹In London, he was rescued by his admirer Sir Frederick Gowland Hopkins at the University of Cambridge. Krebs got appointed to work with him in the Department of Biochemistry.
🔹Later, Dr. Krebs moved to the University of Sheffield as a Professor and gradually got promoted as the Director of a Medical Research Council’s (MRC) unit. He then shifted to the University of Oxford with his MRC unit.
🔹Afterwards, Dr. Krebs associated with William Johnson and together discovered the key sequence of metabolic reactions, which produces energy in cells. He further published his work, which led to the discovery of Citric Acid Cycle or Krebs cycle.
🔹By this cycle, he described the process of how the cells convert sugars, fats, and proteins into intermediates to supply crucial energy (ATP) which is essential for supporting life.
🔹Ultimately, Krebs cycle became a foundational concept of biochemistry and cell biology.
🔹Consequent to his research performance, the most prestigious Nobel Prize for Medicine and Physiology award was offered to Dr. Krebs in 1953.
🔹Moreover, his work resonates in many fields including inborn errors of metabolism, biochemistry and medicine.
🔹Thus, Dr. Krebs’ work reminds us that “Chance Favors Prepared Minds.”

An Architect of Metabolic Cycles