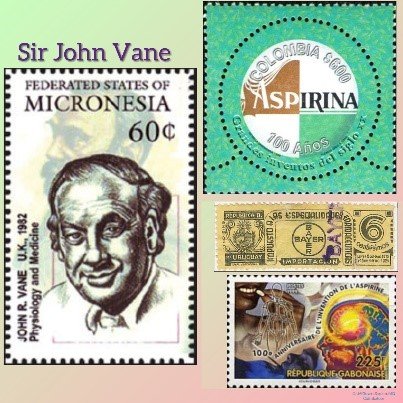 🔸 Aspirin – The Great Invention of 19th century was synthesized by a notable German Chemist of Bayer Pharmaceuticals Felix Hoffman during the year 1897.

🔸In fact, the drug Aspirin was found to be the most selling drug to treat fever, pain and inflammation.

🔹Vane studied chemistry at Birmingham University and completed his Doctorate of Philosophy at Oxford University London in 1953.

🔹After completion of his studies, he began work as an Assistant Professor in the Department of Pharmacology at Yale University, United States and was then promoted as a Professor of Experimental Pharmacology at the Royal College of Surgeons, London.

🔹Actually, Prof. John Vane had a great scientifically productive period throughout his career. During the year 1968, he and his colleagues in London had jointly demonstrated the conversion of Angiotensin Converting Enzyme (ACE) I to II, which occurred on luminal surface of small blood vessels in the lung.

🔹Further, he was the first to crack the 70 yrs old mystery of Aspirin’s mechanism of action.

🔹Infact, he published his research that Aspirin inhibits the formation of prostaglandins and thromboxane A2, which causes blood coagulation in 1971.

🔹Undoubtedly, his experiment led to the low dose of aspirin for stroke and cardio-protection.

🔹Later, he founded William Harvey Research Institute at London for cardiovascular research in 1986.

🔹He also pioneered in…

🔅Role of Nitric oxide and Endothelin in regulation of vascular function.

🔅Development of Captopril the 1st ACE Inhibitors to control hypertension.

🔅Development of innovative drugs such as Atracurium, a muscle relaxant, and Lamotrigine, an anti-epileptic drug.

🔹Moreover, he published more than 700 research articles and various books in the field of medicine.

🔹Ultimately, Prof. Vane was honoured for his fabulous investigations with the below awards,

🔅Lasker Award in 1977 for the discovery of prostacyclin.

🔅Nobel Prize in Physiology or Medicine in 1982 for discovering how aspirin works.

🔅Knighted in 1984 for his contributions to science.

The Man of Blue-sky Thinking