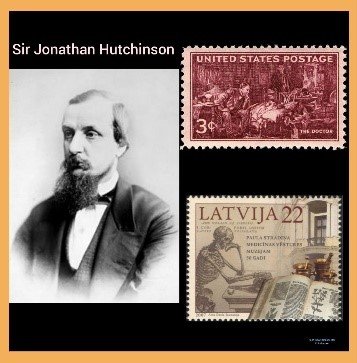 🔸Hutchinson studied medicine under the guidance of his mentor Sir James Paget at St Bartholomew’s Hospital, London. He further studied Ophthalmology at Moorfield’s Hospital and became a member of Royal College of Surgeons in 1850.

🔸Dr. Hutchinson showed interest in various specialities and this led to a glittering career.

🔸During his career, he was recognized as a leading authority on ophthalmology, dermatology, neurology and in particular syphilis.

🔸Moreover, he was a great teacher and an admirable speaker. He would often attract larger number of students to his demonstrations.

🔸He was the founder of museum called “The Hutchinson Educational Museum,” established at Haslemere, England in 1888 (still operational today). It houses his collection of specimens and artefacts on geology, shells, birds and animals.

(He was the first to describe progeria in 1886)

🔸Additionally, he was a prolific writer throughout his life. He wrote the Ten-volume Archives of Surgery from 1885 to 1899.

🔸He wished his Epitaph to be “A Man of Hope & Forward-Looking Mind.”

🔸After his life, his collection of clinical illustrations and case reports – comprising more than 5,000 illustrates of the whole of medicine and surgery – were acquired by the Johns Hopkins Medical School through Sir William Osler.