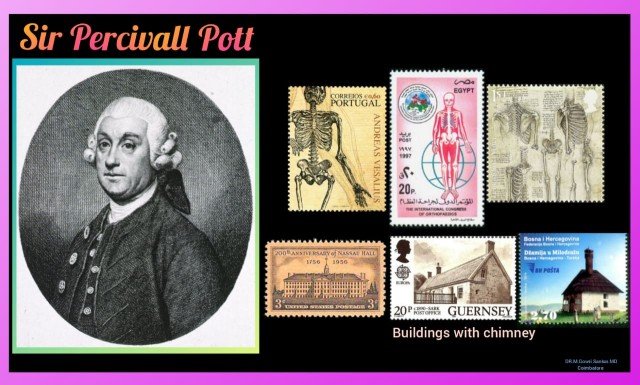 💠English Surgeon
💠One of the Founders of Orthopedics & Occupational Health

🔹Pott lost his father at his young age so he was brought up by his mother.
🔹After his schooling, he did 7 years of apprenticeship under the surgeon Edward Nourse at St Bartholomew’s Hospital, London, where he learned the basic principles of Anatomy and Medicine and also perfected his surgical technique.
🔹Then he became an Assistant Surgeon in the same hospital in 1744 and was later promoted to full time surgeon in 1749. He served in that position until his retirement in 1787.
🔹Once he said that he started in the institution “As a boy and then a man for half a century.”
🔹Further, he became one of the first members of the Royal College of Surgeons when it was founded in 1753.
🔹One day in the year 1756, Pott was suddenly thrown off his horse and sustained an open compound fracture of his lower leg, while he was on his way to see a patient. When his surgical colleagues examined the injury, they recommended the amputation, which was the standard course of treatment at that time.
🔹Whereas, his mentor Edward Nourse advised him a reduction procedure, in which traction and pressure are applied on the fracture to correct the positioning of the bones. His technique worked well and Pott’s leg healed without complication.
🔹That was the time, Pott wrote his first of over 40 monographs, “A Treatise on Ruptures.”
🔹Later, he published his extensive work on orthopedics titled “Some few general remarks in fractures and dislocations” in 1769.
🔹His Eponyms…
🔅 Pott’s fracture – Fracture of the ankle.
🔅 Pott’s disease of the spine – Pott was the first who described the vertebral collapse resulting in kyphosis, a hunchback deformity (Pott’s curvature) in 1779.
🔅 Pott’s paraplegia – Paraplegia caused by spinal cord compression in (Pott disease) tuberculous spondylitis.
🔅 Pott’s puffy tumor – A forehead swelling associated with underlying osteomyelitis of the skull.
🔹He then observed an unusual high incidence of scrotal skin cancer among the young boys. Those were sent up into chimneys to clean away the soot left over from fires. In fact, he began reading the connection between coal soot, lodging in the folds of the scrotal skin and a high risk for scrotal cancer.
🔹After Pott’s investigation, the disease was termed as “Chimney sweeps carcinoma.” Thereby, he became the first to establish the occupational link to cancer and also he was the first to associate a malignancy with an environmental carcinogen.
🔹Ultimately, his research helped chimney sweeps to prevent scrotal cancer by protective clothing. His work also laid the “Foundation for occupational medicine” and measures to prevent work-related disease.
🔹Moreover, Pott has generally regarded as one of the two greatest surgeons of the 18th century along with his student John Hunter.
🔹During his last days, Pott declared that “My lamp is almost extinguished, I hope it has burnt for the benefit of others.”

An Eminent Surgeon of the Pre-antiseptic Era