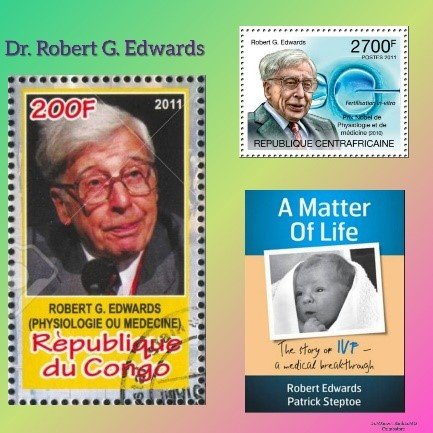 🔹Edwards was born in Batley, Yorkshire. He studied biology at Bangor University and did his Ph.D. on mouse reproduction biology at the University of Edinburgh in 1955.

🔹Later, Dr. Edwards was appointed as a Reader in Physiology at Churchill College, Cambridge.

🔹During his career, Dr. Edwards extensively studied the maturation of eggs from various mammalian species in vitro. He also emphasized that these techniques would become useful in studying human fertilization and pre-implantation development.

🔹But his early attempts to fertilize human eggs failed. But in 1968, he was successful in achieving fertilization of the human egg in a laboratory.

🔹He then collaborated with Dr. Patrick Steptoe, a Gynecologist, who used laparoscopic technique to recover oocytes from infertile patients.

🔹Along with Dr. Patrick Steptoe and the nurse Jean Purdy, Dr. Edwards successfully pioneered conception through IVF, which led to the birth of First test tube baby Louise Brown on 25 July 1978.

🔹Their achievement was recognized as one of the most significant developments in the history of reproduction.

🔹Then the team established Bourn Hall Clinic in Cambridge, the world’s first centre for IVF therapy and also started the First IVF program to train other scientists in their technique.

🔹For his achievement in the development of in-vitro fertilization, he was honoured with various International awards including the prestigious Albert Lasker Clinical Medical Research Award in 2001.

🔹Finally, after 30 yrs of his achievement, Dr.Edwards was awarded the Nobel Prize in Medicine in 2010. The Nobel Committee praised him for advancing treatment of infertility and noted that babies of IVF have similar health statuses to other babies.

🔹Dr. Edwards is remembered for his contribution for human reproduction biology, and as someone who heralded the beginning of a new field of medicine.

The Creator of the Greatest Happiness