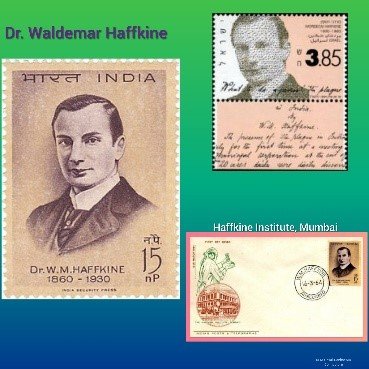 🔹Haffkine was born in Ukraine to a Jewish family. Unfortunately, he lost his mother in his early age and was brought up by his father, who was a school teacher.

🔹After his schooling, he enrolled himself to study Natural Sciences at University of Odessa, Ukraine and graduated as Doctor of Science during 1884.

🔹During his college days, he got inspired by the microbiologist Dr. Elie Metchnikoff. Later, he had him as his mentor.

🔹Thereafter, both Dr. Metchnikoff and Dr. Haffkine moved to the Louis Pasteur Institute in Paris due to the political turmoils after the assassination of the Russian Emperor in early 1880.

🔹Subsequently, Dr. Haffkine began his research and his initial work on producing a prophylactic cholera inoculation was very successful. He then did a series of animal trials to confirm the efficacy of the inoculation. In July 1892, Haffkine had performed his first human test – on himself.

🔹Afterwards, Dr. Haffkine came to know about India as hundreds and thousands of Indians were dying due to the ongoing cholera epidemics and he thought India was the best place to test his vaccine.

🔹Hence, during the Indian cholera epidemic of 1893, he started his journey to Calcutta, where he introduced his new prophylactic inoculation. After crossing the initial criticism raised by the local medical bodies, it was widely accepted.

🔹Furthermore, he did the field trials in India from 1893 to 1896. He was then credited for carrying out the First Effective Prophylactic Vaccination to the bacterial disease in mankind.

🔹After his successful cholera vaccinations, the Governor of Bombay invited Dr. Haffkine to Bombay in 1896 after an epidemic of plague broke out in the city.

🔹Then he started developing the Plague vaccine. On the 10th January 1897, he successfully developed the vaccine. In order to prove that the vaccine is harmless, he inoculated himself.

🔹By the turn of 20th century, the number of inoculates in India alone had reached about four million. Which means his great scientific work had saved millions of Indians.

🔹Obviously, his marvellous work earned him numerous honours and awards. Moreover, the Plague Laboratory in Mumbai was renamed as Haffkine Institute in 1925 in order to remember his work.

🔹In fact, Dr. Haffkine spent about thirty years in India and finally he said “The work at Bombay absorbed the best years of my life…”

🔹Today, The Haffkine Biopharmaceutical Corporation Ltd and The Haffkine Institute for Training, Research and Testing in Mumbai continue to be important centres for public health.

🔹Apart from all the above, Lord Joseph Lister had praised Dr. Haffkine as “A Saviour of Humanity.“

A Physician with Incredible Curiosity

The Saviour of Mankind