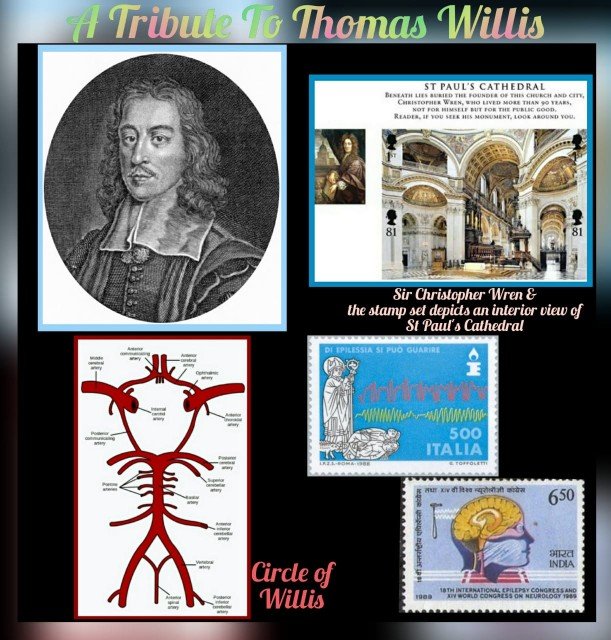 🔹Thomas Willis studied Arts and then did his Master of Arts degree in 1642 at the University of Oxford.
🔹Because of the family’s undying loyalty to King Charles I, Willis and his father went to serve in the civil war. But unfortunately, Willis lost his father in the war. At the same time, King recognized the young Thomas Willis’ service by granting him medical studies in 1646 as a loyalty reward.
🔹After completion of medical studies, Willis started his medical practice at Oxford and showed great interest in the field of Neurology.
🔹Before the entry of Thomas Willis, the concept of Neuroanatomy was very vague and extremely limited. Those were mostly depended on the knowledge of Berengario, Leonardo Da Vinci and Vesalius. These three anatomist were greatly influenced by the Ancient Greek physician, Galen of 2nd century AD.
🔹Thereafter, Willis started working on neuroanatomy and formulating his own hypotheses with experimental and clinical observations.
🔹Consequently, he was the first to describe the seizures and reported that seizures began in the brain, rather than in the muscles and also found that there is a memory loss during seizures.
🔹During his career, he luckily had a group of influential friends, including Sir Isaac Newton and Sir Christopher Wren (the architect who designed St Paul’s Cathedral). Subsequently, Willis had done innovative post-mortem studies by giving intravascular injection of dyes, which was actually prepared by Sir Christopher Wren.
🔹After dye injection, Willis found that vessels got revealed in every secret places of the brain by filling with the same colour.
🔹In fact, Willis is most remembered for his post mortem dye studies in elucidating the Function and anatomy of the arterial circle found at the base of the human brain, which is now called as Circle of Willis.
🔹He was then praised for creating the word Neurology.
🔹He was played the main role in naming many other parts of the brain and the nervous system. The terms that he coined were optic thalamus, vagus nerve, corpus striatum, anterior comissure and internal capsule.
🔹In addition, he created the Numbering system for the cranial nerves.
🔹Furthermore, he was first to describe about myasthenia gravis in 1671.
🔹His Eponyms…
🔅 Paracusis of Willis – Patient experiences better understanding of speech in a noisy environment. This phenomenon is characteristic of patients with conductive hearing loss.
🔅 Willi’s disease I – Historic term for diabetes mellitus. Willis coined the term Mellitus.
🔅 Willis disease II – Asthma.
🔅 Willis nerve – The ophthalmic branch of the fifth cranial nerve.
🔅 Willis pancreas – The uncinate process of the pancreas.
🔹Later, his most famous work was published as “Anatomy of the brain, with a description of the nerves and their function”, which gave an accurate, detailed, illustrated account of the nervous system.
🔹Ultimately, Thomas Willis became one of the greatest physicians in 17th century medicine. His discoveries on the anatomy of the brain 🧠were ground-breaking and shaped the medical field for the future.