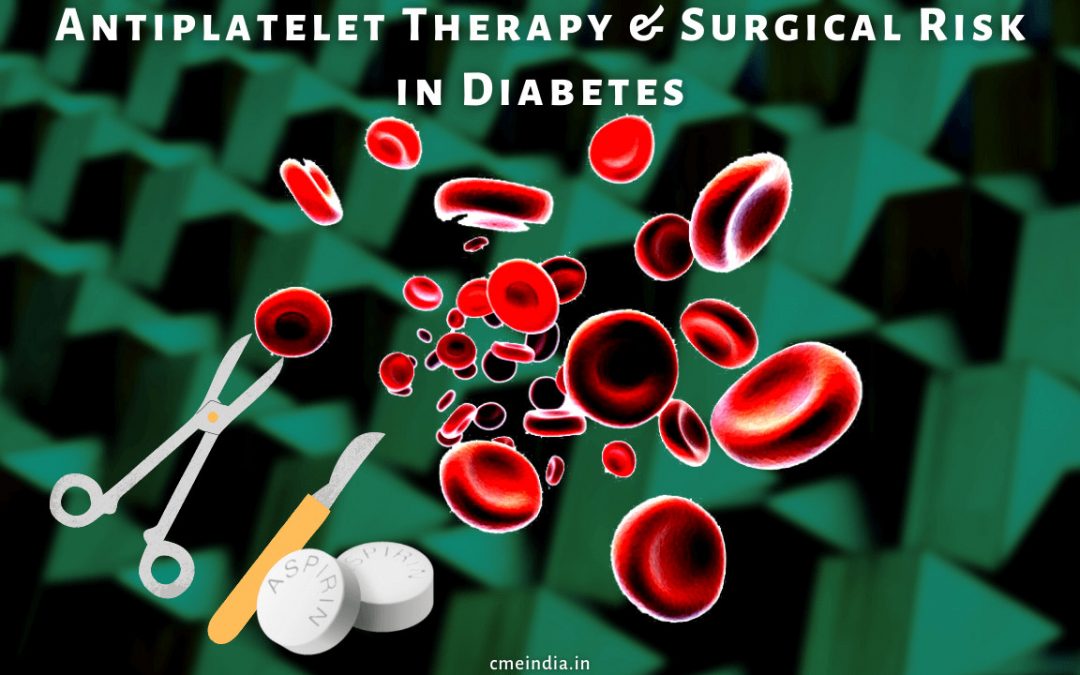 Cardio vascular disease (CVD) is one of the commonest in recent days and the major cause of morbidity and mortality for those individuals. In our day to day practice often we prescribe antiplatelet medicines for our diabetic patients, both as primary prevention and secondary prevention of cardiovascular disease (CVD). So it is obvious that a huge number of diabetic patients are having antiplatelet therapy. It is a common practice among physicians and treating surgeons to stop aspirin prior to surgery because of fear of bleeding complications, based on theoretical risk of bleeding and on isolated case reports of excessive bleeding with aspirin therapy. This practice often predisposes the patient to adverse risk of thromboembolic events, rather than emergencies related to risk of bleeding. So any therapeutic change affecting patients` health sequel is a matter of great concern for us, as CVD is already the largest contributor to the direct and indirect costs of diabetes management. In this review article we would see how safe antiplatelet therapy in surgery in diabetics!

Antiplatelet therapy appears to have a modest effect on ischemic vascular events with the absolute decrease in events depending on the underlying CVD risk 1-5. In the 2015 recommendations of American Diabetes Association, the use of anti platelet therapy is very simply explained in both primary and secondary prevention of CVD6. Aspirin therapy is considered as primary prevention in both type 1 and type 2 diabetes who are at increased risk of CVD. Even they categorize increased risk individuals as those men aged >50 yr and women aged >60yr with at least one additional major CVD risk factor like family history of CVD or hypertension or smoking or dyslipidemia or albuminuria. For secondary prevention aspirin is recommended for any age group diabetics with a history of CVD. Further recommendation says clopedogrel should be used in case of aspirin allergy cases only. They very clearly mention that dual antiplatelet therapy is reasonable for up to a year after an acute coronary syndrome.

As we see, as antiplatelet agent we use aspirin and clopidogrel group of medicines. Aspirin reduces platelet aggregation for the lifespan of the platelet, ∼8–10 days and increases the risk of bleeding! But patients on aspirin therapy may require any non-cardiac or cardiac surgery; even cataract surgery, cutaneous surgery, dental extractions, etc are very common in everyday life. The current consensus and many recommendations are controversial and may not be conclusive in favor of continuing aspirin therapy. But many authors suggested that the perioperative management of anticoagulation in these patients at the time of elective surgery is debatable yet important as it involves balancing the risks of arterial or venous thromboembolism (such as ischaemic stroke, myocardial infarction, pulmonary embolism or deep vein thrombosis) if the drug is stopped, against the risk of bleeding if the antiplatelet drug is continued. However in a special situation like diabetes, which is considered as heart attack equivalent, how safe is discontinuation of antiplatelet therapy needs proper attention. Let us have a journey through medical evidence based tools like literatures, research papers, recommendations, etc in the field of some regular surgical situations to come to a conclusion whether to continue or discontinue antiplatelet therapy prior to those surgeries in our day to day practice.

There is strong evidence that aspirin prevents venous thromboembolism after non-cardiac surgery7, 8. However the Pulmonary Embolism Prevention (PEP) trial included 13,356 patients undergoing surgery for a hip fracture and other perioperative trials have shown that aspirin significantly increases the risk of bleeding requiring a transfusion 7, 8. Recently published the Perioperative Ischemic Evaluation 2 (POISE-2) trial 9 included 10,010 patients from July 2010 through December 2013 at 135 hospitals in 23 countries. Patients were preparing to undergo non-cardiac surgery and were at risk for vascular complications to receive aspirin or placebo and clonidine or placebo. The results of the aspirin trial are reported here. The patients were stratified according to whether they had not been taking aspirin before the study (initiation stratum, with 5628 patients) or they were already on an aspirin regimen (continuation stratum, with 4382 patients). Patients started taking aspirin (at a dose of 200 mg) or placebo just before surgery and continued it daily (at a dose of 100 mg) for 30 days in the initiation stratum and for 7 days in the continuation stratum, after which patients resumed their regular aspirin regimen.

In a systemic review and meta-analysis on the potential risks and health hazards of stopping aspirin confirmed major negative impact and worrying prognostic inference of withdrawal across a greater number of individuals (50,279) at risk of recurrent cardiovascular events 11. We know one of the problems with aspirin withdrawal is the risk of a rebound phenomenon. Abrupt cessation of aspirin results in an increase in thromboxane A2 activity and a decrease in fibrinolysis, resulting in increased platelet adhesion and aggregation 11, 12. One recent meta-analysis found that aspirin withdrawal was associated with a significantly increased risk of myocardial infarction and death 11. Similarly, Ferrari et al. 13 and Chassot et al. 14 suspected the existence of a biological platelet rebound phenomenon on disruption of aspirin therapy, thus creating a prothrombotic state which may ultimately cause fatal thromboembolic events.

We must remember the surgical trauma by itself creates a prothrombotic and proinflammatory state, including platelet activation / aggregation and reduced fibrinolytic activity 15, 16 and the perioperative administration of aspirin with its beneficial effect may prevent major vascular complications by inhibiting thrombus formation 17. Whereas the adverse consequences of arterial thromboembolism followed by withdrawal of aspirin are much more serious, as approximately 20% of these episodes are fatal and 40% episodes can lead to serious permanent disability 11. In any circumstances, if stopping aspirin therapy is essential, it should be limited to 3 or fewer days. Considerable risk of thromboembolic events increased if aspirin therapy is discontinued between 4 and 30 days 13.

Data on the risk of discontinuing antiplatelet therapy in patients with coronary stents have highlighted the use of aspirin in the perioperative period 18-20. One meta-analysis found that aspirin withdrawal was associated with a significantly increased risk of myocardial infarction and death 11.As a result, the routine withdrawal of aspirin 7–10 days before cardiac surgery has been questioned and some recent publications recommend that aspirin should not be stopped routinely in the perioperative period 21-24.

The evidence based clinical practice guideline by American College of Chest Physician clearly mentioned the probable use of aspirin and clopedogrel 25. For percutaneous coronary intervention, pretreatment with clopidogrel is recommended before and throughout the perioperative period. Patients with coronary stents in situ have a high thrombotic risk if antiplatelet drug therapy is interrupted, so elective non-cardiac surgery should therefore be avoided after stent placement when patients are most prone to thrombosis. This is during the first six weeks for bare metal stents, and during the first 12 months for drug-eluting stents. They further recommended, for patients without coronary stents who are not at high risk of cardiac events, only clopidogrel can be ceased 5–7 days before surgery. It is often routine clinical practice to consult the patient’s cardiologist before stopping any of the drugs.

In 2003, very rightly Fijnheer et al. mentioned in a review article that there is scarcity of literature regarding cataract, dermatologic, ear, nose, and throat, and dental surgeries involving patients on aspirin medication 26. In fact few studies in dermatology literature concluded that there is no need to discontinue nonsteroidal anti-inflammatory drugs (NSAIDs) and aspirin preoperatively in patients undergoing cutaneous surgical procedure, as there is no risk of increased bleeding in patients continuing their medications27, 28. Modern cataract surgery rarely causes any bleeding. Topical anesthesia removes the risk of bleeding behind the eye from local anesthetic injections. So, one can continue aspirin unless there are specific instruction to stop.

In 1992, Conti in an editorial mentioned that there is no need to stop aspirin prior to invasive surgical procedure if bleeding time is within normal limit 29. Later on, in view of dental extractions Sonksen et al. 30, Gaspar et al. 31 and Little et al.32 also claimed that there is no significant intraoperative and postoperative bleeding after dental extractions as long as prolongation in bleeding time remains within acceptable limit (bleeding time up to 20 minutes). Matocha stated that risk of bleeding after dental extractions is rare in patients on low-dose aspirin therapy and the incidence of postextraction bleeding complications, including other risk factors, does not exceed 0.2 to 2.3% 33. Brennan et al. reviewed the literature regarding the management of patients on aspirin requiring oral surgical procedures and recommended continuation of aspirin during dental extractions based on results of studies with high level of evidences 34. Based on the review of literature, it can be concluded that current recommendations and consensus are in favor of not stopping antiplatelet dose of aspirin prior to tooth extraction and local hemostatic measures are usually successful. So, there is no justification to predispose the patient to the risk of thromboembolism at the expense of minor bleeding which can be easily controlled. However, clopedogrel should be stopped five days before surgery 25.

Specific risk of clopidogrel in surgery:

The use of clopidogrel throughout the perioperative period is more controversial. Some studies have shown an increased risk of major bleeding with the use of clopidogrel within five days of coronary artery bypass grafting 35. While recognising the increased risk of bleeding complications after coronary artery bypass grafting, some experts recommend a more tailored approach depending on individual risk with respect to ischaemic complications and bleeding 36. For patients without coronary stents who are not at high risk of cardiac events, only clopidogrel can be ceased 5–7 days before surgery 25; to avoid further controversy, same protocol can be followed for clopedogrel since this is the only standard guideline available for this drug. If Clopidogrel is the only option it should be restarted following the procedure as soon as there is adequate haemostasis, usually the morning after surgery.

So, in general since little harm was shown in continuing perioperative aspirin therapy and a trend towards improved outcome was evident, we are convinced that aspirin should be continued perioperatively in any high-risk patients. However, clopedogrel group of medicines should be stopped 5 days before any surgery and should be resumed following the procedure as soon as there is adequate haemostasis, usually the morning after surgery. Hypothetically same should be applicable to diabetic patients may be with some more beneficial outcome as diabetes itself is a known proinflammatory state. However, so far no separate study has been designed to assess outcome in diabetic population which underline definite need for further evaluation in diabetic patients in this important medical aspect.