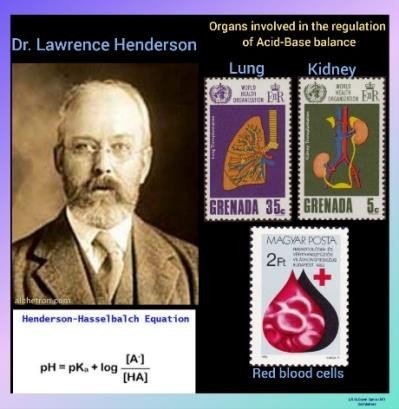 🔸Henderson, during his early days, found that mathematics was much easier than other subjects. But subsequently his interest shifted to physics. Hence, he did his studies in Physical chemistry at Harvard college in 1898.

🔸Further, his interest led him to focus on Biological chemistry, so he studied medicine in Harvard Medical School and graduated in 1902.

🔸After his studies, he spent his 2 years of his research in Biological chemistry at the University of Strasbourg.

🔸Later, he joined as a lecturer in Harvard Medical School and then became a Professor of Biochemistry. His entire professional life was invested in Harvard University.

🔸Moreover, he spent around 15 years (1906-1920) exclusively in investigating Acid-Base balance.

🔸He investigated that acid-base balance was regulated by buffer systems of the blood in complex co-ordination with the lung, the red blood cells and the kidneys.

🔸Ultimately, he derived the Henderson equation in 1908 and also described the carbonic acid as a buffer solution.

🔸In addition, Dr. Henderson constructed and introduced First Medical Nomogram in 1928. This is used to correlate many different aspects of blood physiology.

🔸Apart from all the above, he was a philosophical man and published the following two books…

🔅 The Fitness of the Environment

🔅 The Order of Nature

🔸In his book, he discussed about the planet’s natural environment and concluded that it’s perfectly suited for the development of life.

🔸One of his remarkable philosophical quotes – “When societies are too unstable, individuals suffer.”

The Physician with Highly Creative Imagination