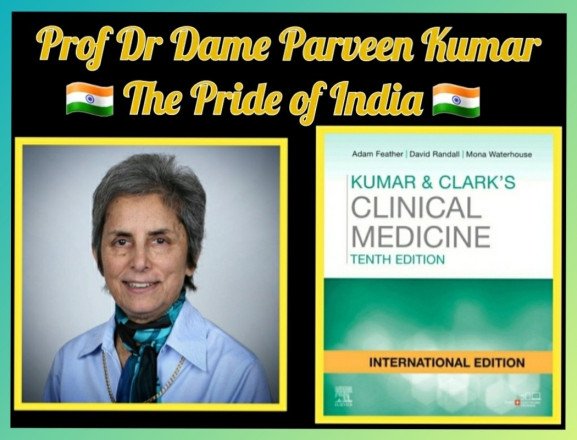 🔸She was professionally trained in Clinical Gastroenterology under the guidance of Sir Antony Dawson and Dr. Micheal Clark.

🔸In 1989, she changed the face of medical publishing by co-authoring the Iconic text book called “Kumar and Clark’s Clinical Medicine,” which became a standard all over the world and its 10th edition is in circulation now.

🔅1000 Questions and Answers from clinical medicine

🔸She was instrumental in setting up the first M.Sc. course in Gastroenterology in the UK. Her interests include teaching medical students across the globe and working for the welfare of global health.

🔸Further, she has held numerous prestigious positions in many academic forums like

🔅Chairman of the Medicines Commission UK.

🔅Non-Executive Director on an Acute Hospital Trust Board.

🔅President of the British Medical Association in 2006.

🔸To recognize her enormous service to medicine she was honoured with the first Asian Professional Woman of the Year award in 1999.

🔸Moreover, she was awarded British Medical Association’s Gold medal for “Services to Medicine and Education” in 2008.

🔸Also, she received the most prestigious Damehood award in 2017 – which is the equivalent of Female-Knighthood, a title conferring an honour to a person in the UK.

The Most Influential Women in the Field of Medical Academics