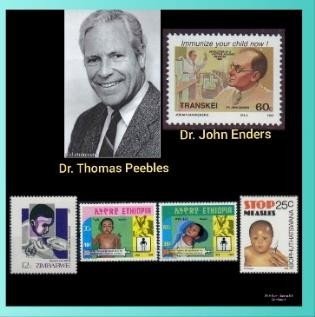 🔸During his young days, Peebles served in the U.S. Navy as a bomber pilot in the Second World War.

🔸After the war, he joined at Harvard Medical School and completed his medical graduation in 1951. Later, he did the fellowship in Children’s Hospital, Boston.

🔸Then he worked with Dr. John F. Enders, who is considered the Father of Modern Vaccine. Further, Dr. Enders also won a Nobel Prize for utilizing the tissue culture method for the development of polio vaccine.

🔸During an outbreak of measles disease in Boston, Dr. Enders insisted that Dr. Peebles focus on the cause of measles.

🔸Hence Dr. Peebles started collecting blood samples from severely ill school students by telling them that “Young man you are standing on the frontiers of science.”

🔸Subsequently, he successfully cultured and isolated the measles virus in Human kidney cell culture by using the blood sample from a 13-year-old boy named David Edmonston.

🔸Based on the virus material collected by Dr. Peebles, Dr. Enders developed the Measles Vaccine in 1963 and named it as Edmonston – Enders strain. This virus strain was eventually used to create measles vaccine.

🔸The measles component of MMR vaccine used today is bolstered by the Edmonston-Enders strain.

🔸Thus the creation of vaccine has prevented numerous deaths worldwide.

🔸Dr. Peebles also continued his research on the Tetanus vaccine and discovered that booster shots should be limited to once in every 10 years, not annually.

🔸Thereby, he significantly reduced the incidence of allergic reactions caused by the higher dosages in common use of tetanus vaccine.

🔸Moreover, he found that urban school students had dental caries due to low fluoride. Then he invented a fluoride additive with vitamins to protect their teeth.

A Paediatrician Who Freed the World from Deadly Scourge