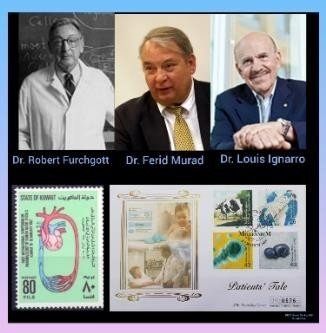 🔸After his studies, he worked as a medical faculty in various institutions. In 1956, he got appointed as a Professor of Pharmacology in SUNY – Downstate Medical College and held the position until 2009.

🔸He did extensive research in the mechanism of drug interaction with the receptors in blood vessels.

🔸In 1978, he successfully discovered a substance in the endothelial cells of rabbit arteries, which relaxes the blood vessels. He named the substance as Endothelium Derived Relaxing Factor (EDRF).

🔸Scientist build upon each others work – One year before Dr. Furchgott’s discovery, Dr. Ferid Murad, an American Physician. had demonstrated that nitroglycerin and related drugs, acting as a releasing nitric oxide, resulted in relaxing the smooth muscles by increasing cyclic GMP.

🔸The missing step in the signalling process was filled up by an American Pharmacologist Dr. Louis Ignorra. He had demonstrated EDRF as nitric oxide.

🔸Dr. Furchgott along with Dr. Ignorra were the first to announce the findings of nitric oxide at a scientific conference in 1986. This triggered an International boom in the research on nitric oxide.

🔸In 1998, Dr. Furchgott along with Dr. Ignorra and Dr. Murad shared Nobel Prize in Physiology or Medicine for the discovery that nitric oxide acts as a signalling molecule in the cardiovascular system.

🔸Further Dr. Furchgott discovered a phenomenon known as Photo-relaxation in which muscles get relaxed while exposed to ultraviolet light.

🔸His work on nitric oxide uncovered a new mechanism of how blood vessels in the body get dilated.

🔸Ultimately, this paved the way for the development of the drug sildenafil citrate – Viagra, which is now widely used to treat erectile dysfunction and pulmonary arterial hypertension.

A Brilliant Scientist and a Prince of Science