Genie leaking out of bottle turning out to be a Monster? World fights a Man-Made Virus? 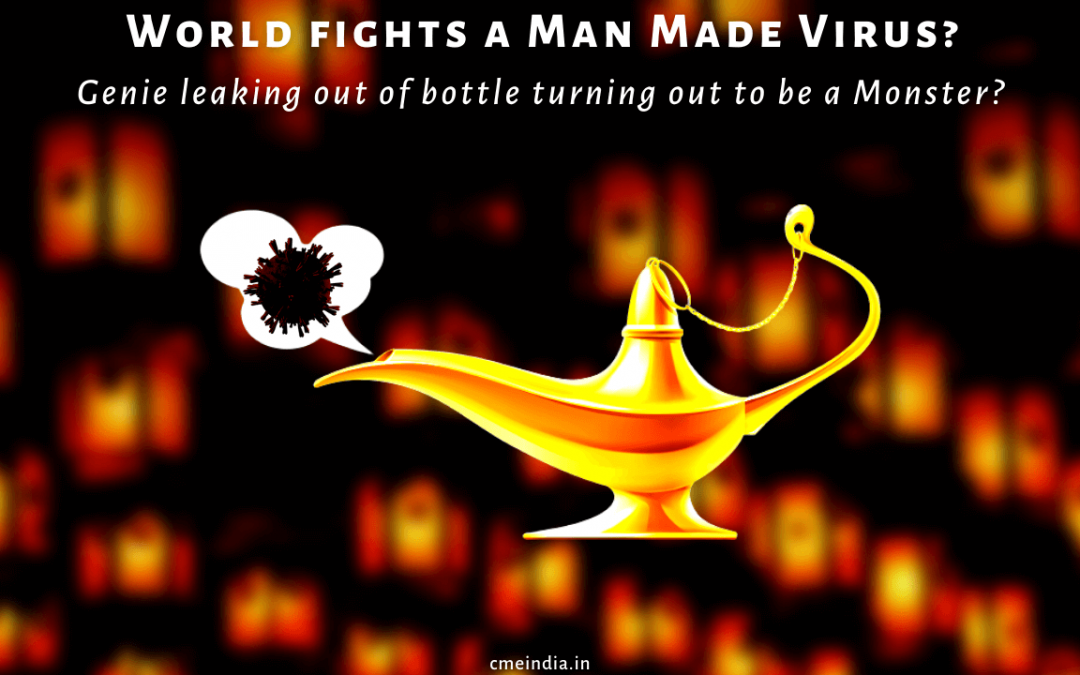 This article is a review on state of affairs which the world is facing today.

“As humans, when we are given two possibilities, we assume that they are somewhat equivalent in likelihood, so when you hear “lab leak or natural origin” it’s not unreasonable to assume that those two things are about as likely as one another, even though that makes no sense whatsoever” – Gideon Meyerowitz-Katz (Epidemiologist working in chronic disease in Sydney, Australia).

Pandemic spread to every nook and corner of the world

But the damage is least in Wuhan and China

World seems to have risen to explore the truth

What is the need of Hour?

Investigations have been done in past too but how?

What did Indian researchers find?

Who else wants enquiry?

Truly USA too has Hand in Glove?

What is Gain of Function Research?

Arguments in Favour of Nasty Research

Supporters of the GoF research argue that

SARS-CoV-2 is a product of Gain of Function (GoF) laboratory research?

When did World Super Powers shift the focus of Research from Big tanks & Fire gun to Micro Weapons capable of mass destruction ?

What is Furin clevage site?

During the process of invasion of Human cells by SarsCov2:

What more evidence could one want, aside from the presently unobtainable lab records documenting SARS2’s creation?

Is it less than a War?

Man Made Virus – who all are Gulity?

First and foremost, Chinese virologists are to blame for performing gain-of-function experiments in mostly BSL2-level safety conditions which were far too lax to contain a virus of unexpected infectiousness such as SARS2.

Shi, the Bat Lady, is the public face of Chinese work on Corona viruses, and provisionally she and her colleagues will stand first in line for disgrace.

Having been exposed to best labs in the World she could and should have made her own assessment of the risks she was running. She and her colleagues should bear the responsibility for their actions.

China’s central authorities did their utmost to conceal the nature of the tragedy and China is  responsible for it. They suppressed all records at the Wuhan Institute of Virology and closed down its virus databases.

3. The world community of Virologists.

Q1. Do worlds top virologist know each other?

Yes, Virologists around the world are a loose-knit professional community. They write articles in the same journals. They attend the same conferences.

Q2. Were they not aware of dangers?

Virologists knew better than anyone the dangers of gain-of-function research.

Q3. Why do Virologist Love to play with Dangerous Virus?

The power to create new viruses, and  the research funding obtainable by doing so, is always too tempting. They pushed ahead with gain-of-function experiments. They rather  lobbied against the moratorium imposed on Federal funding for gain-of-function research in 2014, and it was revoked in 2017.

Being overburdened with safety regulations makes work Difficult and Slow.

Q5. Have there been any benefits of the Viral research in preventing future epidemic?

So far been NIL.

Q6. Do You  think the SARS2 pandemic would spur virologists to re-evaluate the benefits of gain-of-function research? No.

Professions that cannot regulate themselves deserve to get regulated by others, and this would seem to be the future that virologists are choosing for themselves.

Who all are Gulity?

1. China 2. Chinese Virologist 3. World community of virologists 4. The USA Govt. through its National Inst. of Health.

Master Brain Behind the Virus Research

Story of Research Funding So far:

Journals and Journalists across World

Theory of lab leak may be impossible to prove