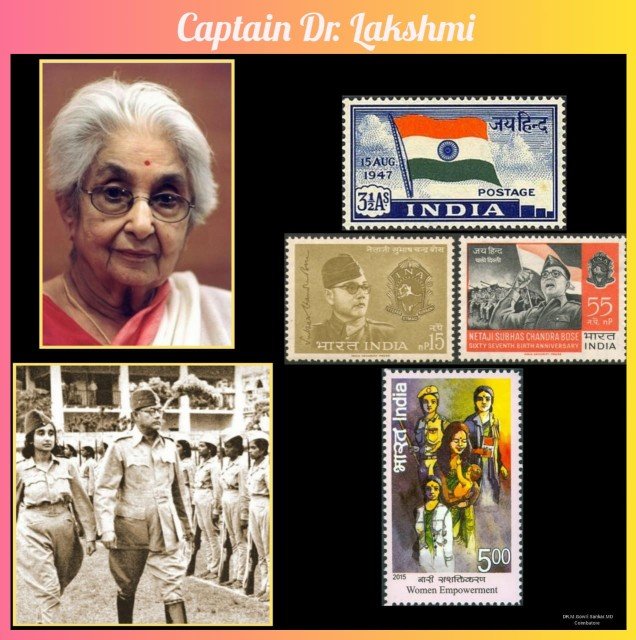 🔹Lakshmi was born in a  traditional Tamil family in Chennai. Her father Swaminathan, was a lawyer and her mother Ammu kutty, was a social worker as well as a freedom fighter.
🔹After completion of schooling, Lakshmi enrolled herself in Madras Medical College to study medicine and received her graduation in 1938.
🔹She did her Diploma in Obstetrics & Gynecology and then worked at Government Kasturba Gandhi Hospital, Chennai.
🔹As a young doctor of 26 years, Dr. Lakshmi moved to Singapore in 1940 to continue her career as a doctor. But she didn’t know the great things waiting for her.
🔹While in medical service, she was guided to meet our great leader 🇮🇳 Netaji Subhash Chandra Bose 🇮🇳. In fact, this particular meeting changed her course of life.
🔹During that time, Netaji was actually planning to form a women wing of freedom fighters called “Rani of Jhansi Regiment” as a part of Indian National Army (INA) in order to fight against the British domination.
🔹Netaji found Dr. Lakshmi as the most trusted “Lieutenant” of Rani of Jhansi regiment. The regiment under her leadership had gained tremendous response from women across the country. One thousand women freedom fighters and two hundred nurses were raised to save the country.
🔹As well as, she served as a doctor in the war field and also picked up the gun and fought like a tigress against the British in the jungles of Burma. Thereby, Dr. Lakshmi became “Captain Lakshmi,” and she gained recognition and became synonymous with that name.
🔹In the Burma warfield during 1945, she was caught by the British army and kept under house arrest in the jungles of Burma for a year.
🔹Later in 1947, she married to Colonel Prem Kumar Sahgal, who served along with her in the INA.
🔹After India’s freedom, she resumed her medical practice at Kanpur and also worked for the welfare of poor patients.
🔹Moreover, she was a great social activist. During the Bangladesh’s War of Independence, she supported thousands of refugees by organising the relief camps and medical aid at Calcutta. She also led a medical team to treat the victims of Bhopal gas tragedy in 1984.
🔹Eventually, she was honoured with the most prestigious Padma Vibhushan award in 1998, which is the second-highest civilian award of our country.
🔹After her death, at the age of 97 at Kanpur, her body was donated to Kanpur Medical College for medical research as per her wish.
🔹Captain Dr. Lakshmi was recognized as a freedom fighter and a dedicated medical practitioner as well as an outstanding leader of the women’s movement in India. In fact, she became a good example for the human being by her way of thinking and serving others.