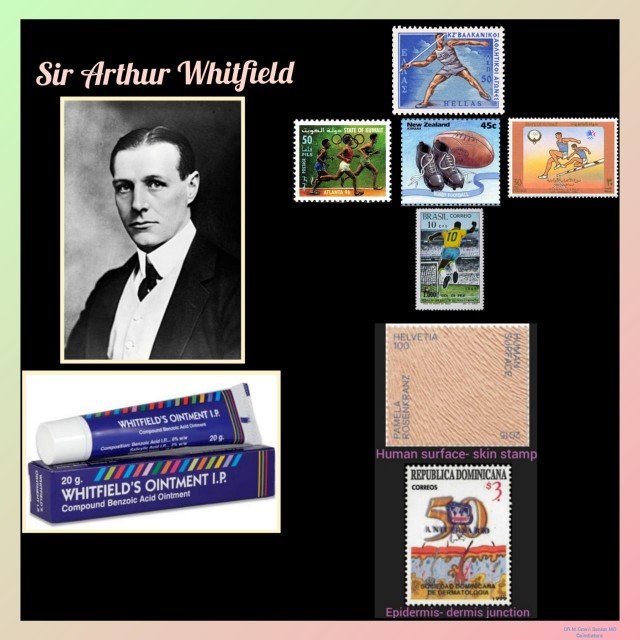 🔹Arthur Whitfield was born in London. He studied medicine at King’s College, London, and got his MD Graduation in 1893. Then he did post graduation studies at Vienna and Berlin for 3 years.
🔹Upon his return to London, he was appointed as physician at West London Hospital. Later, he became the first Professor of Dermatology at King’s College Hospital as well as at the Royal Army Medical College.
🔹He showed a great interest in the field of dermatology and did work on bacteriology of acne vulgaris, naevus, autophytic eczema, xanthomas, vaccine therapy in cutaneous diseases and so on.
🔹He authored A Handbook of Skin Diseases and their Treatment in 1907 and published numerous articles on skin diseases to medical journals.
🔹But Dr. Whitfield is best known for his work on athlete’s foot. It was a new disease during that period, and occurred due to modern lifestyles and hygiene practices of wearing socks and shoes.
🔹He was the first to identify the causative role of fungi in causing athlete’s foot or Tinea pedis. He also published his work on tinea pedis in the Lancet in 1908.
🔹Further, he introduced the treatment for tinea pedis with “Whitfield’s Ointment.”
🔹This ointment has a combination of Benzoic acid and Salicylic acid, which has a therapeutic action of fungistatic and keratolytic agent. This ointment still holds the valuable place in treating fungal infections.
🔹Dr. Whitfield served as an outstanding teacher throughout his career and delivered a series of annual lectures called Lumleian Lecturers at the Royal College of Physicians, London.