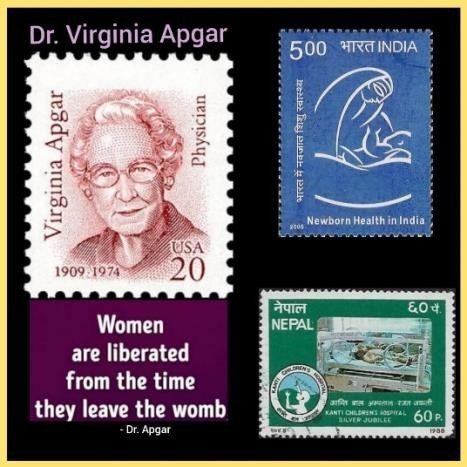 🔸Apgar was brought up in a family of musicians. She learned to play violin during her childhood and continued to play till her last days.

🔸Her medicine interest might have come through her father as he was an amateur inventor of homemade telescopes and radios.

🔸Unfortunately, she had seen her elder brother die due to tuberculosis. Another brother was struggling with chronic illness. These painful experiences would also have stimulated her to get into medicine.

🔸She completed her medical studies and graduated from Columbia University College of Physicians and Surgeons in 1933.

🔸Her mentor Dr. Allen Whipple encouraged her to practice anaesthesiology, after seeing her energy level and ability.

🔸In a short time, she got trained in anaesthesiology in 1937 and got appointed as a Director in newly established Division of Anaesthesia in Columbia University.

🔸She was the first woman to became a Professor at the Columbia University in 1949 and continued her service until 1959.

🔸During her service period, she initiated her clinical research. In 1950, she introduced the APGAR Score. This was the first standard method to assess the viability of new-born babies.

🔸The methodology was simple and prompt and was thus quickly adopted by all Obstetricians. Thereby the Infant mortality rate was greatly reduced and the Foundation of Neonatology was placed.

🔸Her last name APGAR was used as a mnemonic in APGAR Score:

🔸Further, she served as a Vice President for “March of Dimes,” which is an organization focusing on the prevention of polio, premature death and birth defect. She held the position from 1959 to 1974 – until her death.

🔸Additionally, she promoted Universal Vaccination during the Rubella epidemic in 1964 and then effectively promoted the use of Rh testing for mothers.

🔸Apart from all the above, she had a great love for music. She even made her own violin and used to carry it wherever she went to play with the local musicians.