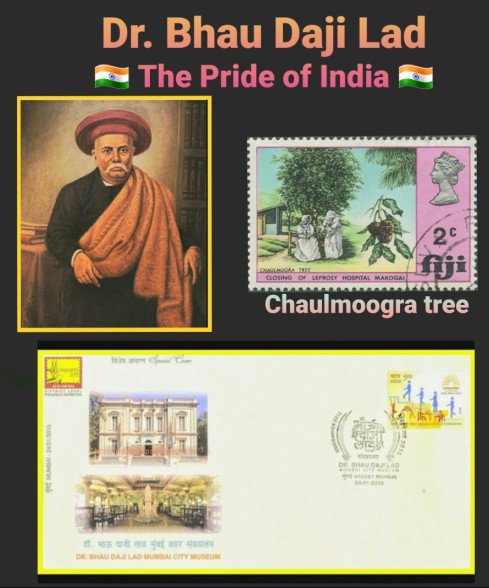 🔸Bhau Daji was born in the small village of Goa, India. His family was poor but he was a childhood genius and a brilliant chess player, which attracted the attention of Governor of Bombay.

🔸After completion of schooling, he moved to Mumba and did his higher studies at Elphinstone college in 1840. There, he also served as a teacher for a brief time.

🔸In 1844, he won the first prize in a essay competition on Female Infanticide. The competition was conducted by the British Government.

🔸Then he applied to join medicine at the Grant Medical College, Bombay which was established in 1845. He was one among eight medical students of the first batch of the institution and completed his medical studies in 1851.

🔸While studying Western medicine, he also showed interest in the Sanskrit language and the Indian System of Medicine, which pushed him to collect more manuscripts of medical subjects written in Sanskrit, Arabic and Pali.

🔸While reading the manuscripts he developed an interest in the treatment of leprosy. He further developed a garden and nurtured many native medical herbs to curb leprosy.

🔸He started treating the leprosy patients by using Chaulmoogra Oil, which was prepared from the seeds on the fruit of the Hydnocarpus wightianus or Chaulmoogra tree. He observed the clinical improvement after administrating the oil on external application and by systemic oral intake.

🔸After the recovery of a few patients, he became popular all over the country and it was called the Bhau Daji’s Method of Treatment, which further attracted the attention of the modern medical world.

🔸Chaulmoogra oil was the only source to treat leprosy till the discovery of Dapsone in 1941.

🔸Further, Dr. Bhau Daji was an Eminent Surgeon who had done many modern surgeries and also practised midwifery.

🔸Moreover, he took part in many social reforms related to widow remarriage and female infanticide and many political reforms while he was Sheriff of Bombay in 1869 and 1871.

🔸As an educationist, some of his contributions to the society are:

🔅Founder member of University of Mumbai, established in 1857.

🔅Founder member of the Native General Library (also donated many of his books).

🔅Elected member of the Bombay Board of Education.

🔸In addition, he had an amazing collection of Ancient Indian Coins and inscriptions of many ancient Sanskrit authors.

🔸He had great love and respect from the people and was affectionately called Dhanvantari. Unfortunately, his sudden demise left his mission on leprosy incomplete.

🔸The Journal Nature sadly expressed his demise as… “This very remarkable native of India, the true friend of his fellow countrymen as well as of science and learning died on May 31, 1874.”

🔸To honour his enormous service The Victoria and Albert Museum, where he was instrumental in raising funds for constructing a new building for this museum a hundred years back in 1870s, situated at Byculla East of Mumbai was renamed Dr. Bhau Daji Lad Mumbai City Museum in 1975.