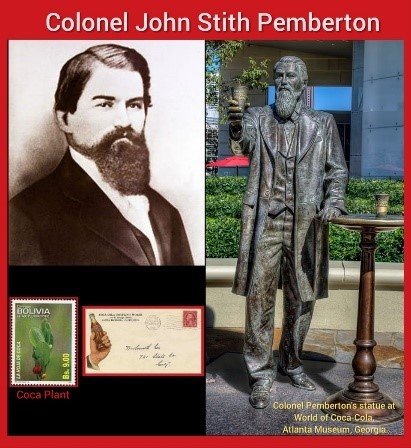 🔸Pemberton was born in Knoxville, Georgia, United States. He was fascinated by chemistry from a very young age.

🔸Hence, he joined to study Medicine and Pharmacy at the Reform Medical College of Georgia. At the very young age of 19 years, he got a licence to practice pharmacy.

🔸Initially, he practised Medicine and Surgery and later he established a wholesale retail drug business.

🔸During the American Civil War, he went to serve as a Lieutenant Colonel. While serving, he was severely injured. He was taking morphine to relieve his pain but slowly got addicted to it.

🔸To overcome his addiction, he started replacing it with painkillers, which act as a opium free medicine alternative to morphine.

🔸Further experimentation led to the discovery a tonic composed of  Peruvian coca extract –  the purest wine and kola nut, which he termed Pemperton’s French Wine Coca.

🔸He was forced to take out alcohol in his tonic due to new prohibition law in the city. Therefore, he blended it with carbonated water and started selling this as beverage rather than medicine and coined the term  “Coca-Cola.”

🔸Subsequently, he marketed the same as Valuable Brain Tonic, which is “Delicious and Refreshing” to cure headache, anxiety, depression and indigestion.

🔸Unfortunately, he fell ill due to his early intake of morphine. Hence, he sold his Secret formula to meet his expenses and to combat addiction.

🔸He strongly believed that… “His formula would be accepted one day as national drink.“

A Creator of a Refreshing Idea