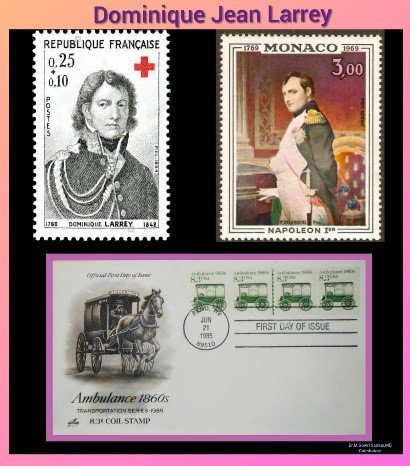 🔸Larrey was born as a son of a shoemaker. Unfortunately, he lost his family and became orphaned at his young age of 13 years.

🔸Then Larrey was apprenticed to his uncle, who was the chief surgeon. Later, he studied surgery in Paris.

🔸After his medical studies, Larrey joined as an army surgeon in the French army led by Napoleon Bonaparte.

🔸Larrey spent around 18 years with Napoleon and was in his 25 campaigns and 60 battles. Undoubtedly, Napoleon achieved enormous victories because of the strong medical service provided in the battle by Larrey.

🔸Larrey was the first to identify contagiousness of trachoma in 1802.

🔸He was also the first to introduce Flying Ambulance, a horse drawn cart with medical team, medical equipments and trained crew of drivers to treat the wounded soldiers in the field and to evacuate them early.

🔸Larrey was highly appreciated for his care to the wounded soldiers regardless of their nation in battlefield.

🔸He further coined and introduced a new concept called Triage. By this concept, he insisted to give first attention to the dangerously injured soldiers.

🔸Moreover, he strongly believed that early and fast amputations of injured legs would save the life. Hence, he performed more than 200 amputations within 24 hours. He was also the first to describe the therapeutic effects of Maggots on open wounds.

🔸Additionally, he did the first successful pericardiocentesis for cardiac tamponade secondary to penetrating injury in 1829 and also did draining procedures for empyema and hemothorax.

🔸His devoted work was greatly admired and honoured by Napoleon as “The worthiest man he had ever met.”

🔸Furthermore, his work revolutionized the emergency care. Thereby the International Red Cross and Geneva conventions were created for caring the wounded soldiers.