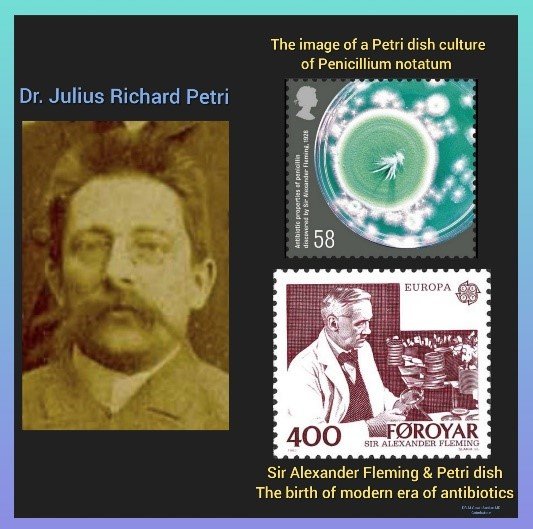 🔸Petri studied medicine at the Kaiser Wilhelm Academy for Military Physicians in Berlin and graduated in 1876.

🔸His fascination in bacteriology motivated him to work as an assistant for Dr. Robert Koch at Imperial Health Office, Berlin in1877.

🔸At lab, Dr. Petri observed that Dr. Koch and his lab assistants used Agar as a growth medium to culture bacterial colonies.

🔸Initially Dr. Koch used the glass tube filled with agar to culture organisms. He felt that the depth of the tube made it difficult to see strains of bacteria.

🔸Then Dr. Koch tried using agar on open glass plates and covered it with a bell jar. It got contaminated when the bell jar was removed to observe the plates under microscope.

🔸To overcome the difficulties, Dr. Petri devised a shallow, round, clear glass of double dish with sides. One dish was slightly larger serving as a lid as well as shield.

🔸Further Dr. Petri observed that by using his dish the chance of contamination of bacterial culture from airborne germs rarely occurred. Thereafter his dish became popular among researchers and the same was named as Petri Dish in 1892.

🔸While being in Dr. Koch’s lab he also developed a new technique called Cloning (or producing exact copies of bacteria strains) on slants of agar formed in the test tube followed by subculturing of the growth onto the Petri dish. This technique is still being used today.

🔸His remarkable contributions has been carried over from the last 125 years. It has supported the growth of microbiology.

🔸Moreover, in the modern era, the Petri dish is also used in various fields such as Biotechnology, Stem cell therapy and in In-vitro fertilization.

A Keen Observer and Innovator