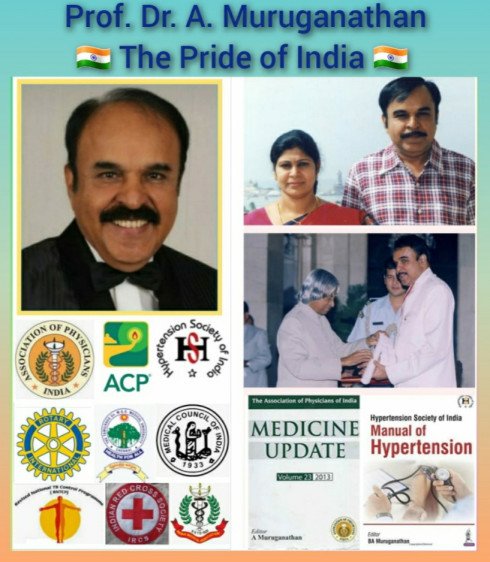 🔸Dr. Muruganathan was born in a small town called Bhavani in Erode District of Tamil Nadu. His father Mr. C. S Arumugam was a Superintendent of Police and his mother Mrs. Palaniammal was a homemaker.

🔸He did his schooling from Coimbatore. Then he studied MBBS from Stanley Medical College, Chennai and graduated in 1974. Further he completed his MD in General Medicine from Madras Medical College (MMC), Chennai in 1978.

🔸After his studies, he trained in the Intensive Medical Care Unit at Government General Hospital, Chennai. Then he started his private practice in Tirupur, a Knitwear hub of India also known as “Baniyan city,” which had an inadequate medical infrastructure during that time.

🔸Knowing the need for medical care, he started a Multispeciality Hospital with an Intensive care setup. Thereby, he took care of all medical emergencies including poisoning and snake bite cases and saved thousands of lives.

🔸During his initial days, he did research work on lung diseases like asthma and byssinosis, which is more prevalent in the city and started an Asthma club to educate the poor labourers.

🔸Of course, Dr. Muruganathan is known for his exemplary social service. Being the son of a disciplined police officer, he started his social service even in his younger days. He served as Sergeant in Auxiliary Cadet Corps, as Chief Traffic Warden and in National Cadet Corps (NCC).

🔸Despite being a practicing physician, he continued his exemplary services by conducting many visionary programs, under the motto of Health for All. Some of them are:

🔅Tree planting (he planted more than one lakh tree saplings).

🔅Initiated a project for the welfare of street children and mentally retarded children.

🔸Further, he rendered his service by holding many prestigious positions in academic forums:

🔸Besides, Dr. Muruganathan is a prolific writer, who contributed more than 200 chapters to various textbooks in medicine and Published more than 100 research articles.

🔸He is also the Editor-in-Chief of textbooks:

🔸Indeed, he is also the Assistant Editor of the Journal of the Association of Physicians of India (JAPI).

🔸Dr. Muruganathan is known for his various innovations…

🔅During his Rotary Governorship, he introduced the concept of Trauma Care Centers in National High ways to help road accident victims which were adapted by the Government later.

🔅First to start Hypertension clinic in his hospital in 1981, which was inaugurated by Prof. Dr. Sam G. P. Moses.

🔅Introduced a novel concept of “Physicians Day” on the birthday of API on 23rd December.

🔅Instituted a unique award for Eminent Physician in the name of the Dr Jivraj Mehta Award.

🔅Promoted fruit bouquet as a gift than a flower bouquet, as fruits are rich in potassium, which is good for hypertension.

🔅Launched MEDI BEATS – Pearls to Practitioners, a weekly e-Medi newsletter which is shared with 1.5 lakh doctors across the globe.

🔸His incessant service brought him many laurels from reputed institutions including…

🔅Fellow of the Royal College of Physicians (Glasgow, London and Ireland).

🔅Fellow of the Indian College of Physicians (FICP).

🔅Fellow of the American College of Physicians (FACP).

🔸His service in the field of medicine is well recognized and honoured with more than 100 awards including:

🔅Best Performing Doctor Award from the Government of Tamil Nadu in 2014.

🔸During the Covid-19 Pandemic, he played a key role in disseminating knowledge of covid-19 by connecting Pan-India and across Globe by hosting online meetings and webinars. He also holds the record of conducting 1000 webinars since March 2020 on various medical topics.

🔸Throughout his career, Dr. Muruganathan has been well supported by his wife Dr. Bhanumathy, a practicing Gynecologist in Tirupur.

The Most Vibrant Physician and Charismatic Leader of Mother India