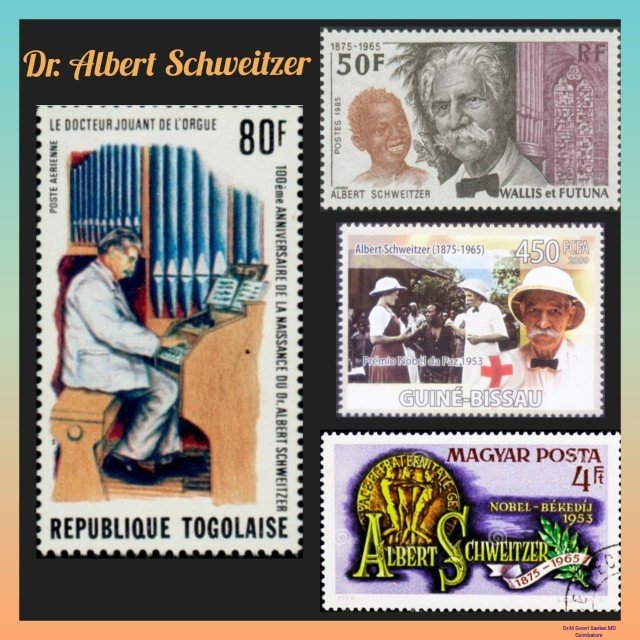 🔸Schweitzer’s family had been devoted to religion, music, and education for generations.
🔸Therefore, Schweitzer completed his theological studies at the University of Strasbourg, Germany during 1893 and then obtained his Doctorate in Philosophy in 1899.
🔸He was also a brilliant pianist and a prodigious musician at his young age. He became a recognized concert organist in his period and thereby music became an integral part of his life. His musical talent earned him international recognition as well.
🔸After some time, he came to know from an article that the native Africans were suffering the worst illness and there was urgent requirement of physicians in Gabon in Africa.
🔸In fact, the message burdened his heart greatly, so he went to study medicine at the University of Strasbourg to serve for Africa. He received his MD graduation in 1913.
🔸After completion of his studies, Schweitzer and his wife Helene Bresslau – who was a trained nurse – began their journey to Lambarene in Gabon in Africa as a Medical Missionary.
🔸By using the funds earned from royalties, he established a missionary hospital at Lamberane to serve them. Later, it was named as “Albert Schweitzer Hospital,” where he served as a physician and surgeon in treating illness.
🔸Further, he turned his attention towards other problems of the world. In 1952, he contributed himself to work against nuclear tests and nuclear weapons and also co-founded “The Committee for a Sane Nuclear Policy.”
🔸Finally, he was honored with many awards for his medical and humanitarian works. In the year 1953, he was honoured with the Nobel Prize for Peace for his immense role in promoting world peace. He was the only physician to have been awarded for peace. He utilised his prize amount of $33,000 to start a leprosy wing at Lambarene.
🔸In his life, he played a very effective role in all following disciplines such as philosophy, theology, music and medicine and above all, he was a great humanitarian.
🔸Schweitzer was fond of saying “My life is My Argument.” Moreover, he symbolizes as “The Man of Lambarene.” He inspired the founding of clinics, orphanages and hospitals throughout the world. He spent most of his life at Lambarene and he was buried there after his death. Today, his hospital continues to serve the needy people of the region.

A Physician of Versatile Personality and a Man of Symbol.