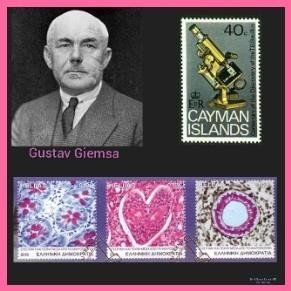 🔸After completion of his studies, he began his career as an assistant at Bernhard Nocht Institute (Institute for Tropical Diseases) in Hamburg. Gradually he was promoted as Head of the Department of Chemistry.

🔸Simultaneously, he had improved the Romanowsky stain (eosin & methylene blue).

🔸In fact, he is best remembered for his creation of the dye solution, which is commonly known as “Giemsa stain.” Giemsa’s stain is a mixture of methylene blue, eosin and azure B.

🔸Giemsa used the stain for the histopathological diagnosis of parasites such as malaria, trypanosoma, chlamydia, histoplasma and other protozoans.

🔸Giemsa’s stain is considered the world-standard diagnostic technique for malarial parasite and it is also the basic stain for Classifying lymphomas in the Kiel classification.

🔸In modern medicine, Giemsa stain became an essential dye in the field of Cytogenetics.

🔸Also, Giemsa stain is used to stain chromosomes called Giemsa banding or G-banding. It produces a series of light and dark bands, which enables karyotyping and identifies the chromosomal aberrations.

The Bacteriologist with a Do or Dye Attitude