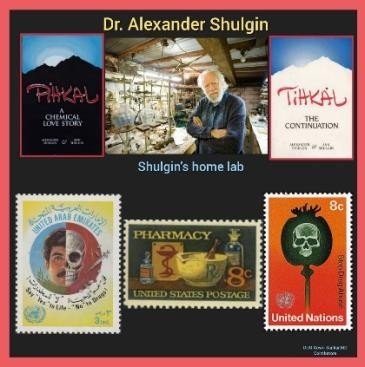 🔸Then he completed the Post-doctoral work in the field of Psychiatry and Pharmacology. He also studied Neurology at San Francisco School of Medicine.

🔸At the beginning of 20th century, there were only two Psychedelic compounds – Cannabis and Mescaline.

🔸Dr. Shulgin is credited with introducing MDMA (3,4-Methylene Dioxy Meth Amphetamine) or Ecstasy to Psychologist and for Psychopharmaceutical use in late 1970. He further discovered and synthesized around 230 Psychedelic compounds.

🔸He had setup a home-based laboratory and had tested these drugs by himself, giving them to his wife Ann Shulgin and to his research group of 6-8 of close friends.

🔸Moreover, his wife Ann Shulgin and himself authored two books. Those are

🔅PIHKAL – A chemical love story: PIHKAL standing for PhenethyIamines – I Have Known and Loved.

🔅TIHKAL – A continuation: TIHKAL standing for Tryptamine – I Have Known and Loved.

🔸Both of these books have extensively described their experiments and the personal experience with these two classes of psychoactive drug.

🔸Finally, he declared in 1995 – “I am very confident that the day will come in future to understand my work and then would recognize for its medical value.”

🔸Dr. Shulgin become known as the Godfather of Ecstasy. As he had prophesied, the door was opened for his drug MDMA in the field of medicine to alleviate the fear and anxiety among terminally ill cancer patients.

🔸Further, Dr. Shulgin’s invention led to a breakthrough – MDMA-Assisted Therapy was used for Post-traumatic stress disorder and was also proposed as an adjunct for other psychiatric disorders.