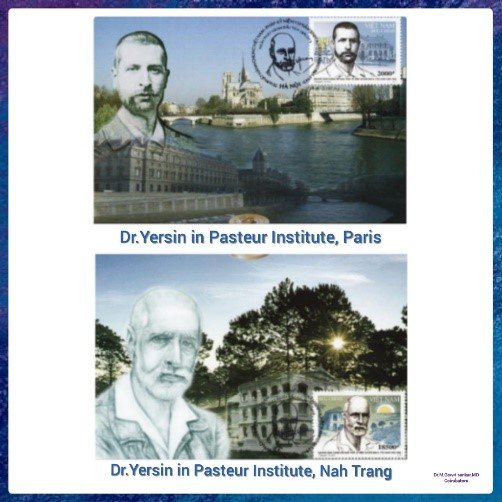 🔹Yersin was born in Switzerland to a family of French origin. He studied medicine in Switzerland and later at Marburg, Germany. He began his career working with Louis Pasteur in the development of the anti-rabies vaccine.

🔹After completion of his doctorate in 1888, he worked for few months with Dr. Robert Koch in Germany.

🔹Later, he returned to Paris and joined the Pasteur Institute. There he started his research with Dr. Emil Roux and together they discovered Diptheria Exotoxin and proved that the toxin gives rise to the symptoms of the disease, not the bacterium.

🔹In fact, he yearned to travel the world as a medical adventurer. Soon, he left for French occupied Indochina in South-East Asia as a ship doctor for a shipping company. There he explored many parts of Indochina especially in Vietnam.

🔹As an explorer, he travelled to the remote jungles by the elephants and ultimately discovered the sources of the Dong Nai River and explored the Lam Vien Plateau of Vietnam.

🔹During the outbreak of pneumonic plague in the year 1894 in Hong Kong, Dr. Yersin was sent to investigate as the member of the French Colonial Health Service. He took only his microscope and an incubator as an equipment to support his investigation.

🔹In a span of three weeks, he isolated the causative plague bacilli from both humans and rodents and then identified fleas that bit infected animals as the vector. In fact, he made this ground-breaking work at the age of 30 years. Later the bacilli were named Yersenia Pestis in his honour.

🔹As Plague became pandemic, it affected many cities in India including Bombay. Then, Dr. Yersin reached Bombay and spent few years in experimental research including the preparation of plague antiserum.

🔹He then return to the coastal village of Nha Trang in Vietnam where he lived for the rest of his life. There he founded Pasteur Institute in 1895, which became a part of Pasteur Institute, Paris and established the starting point of a network of research laboratories.

🔹In the Institute, he developed vaccines and antisera and also started studying about the diseases of tetanus, chlorea and smallpox. He further founded a medical school in Hanoi in 1902 and served as its first director.

🔹He was also an agronomist. He undertook the cultivation of corn, rice and coffee and introduced the Brazilian rubber tree for the economic development of the indigenous people.

🔹Subsequently, he planted the Peruvian cinchona tree, which enabled Indochina to meet its quinine needs during the First World War to combat malaria.

🔹Certainly, Dr. Yersin invested his life and career in Vietnam and in humanity. He died at his old age of 80 years and was buried in Vietnam as per his will. He is still remembered in Vietnam as a devoted scientist and beneficent physician.

🔹An epitaph on his tombstone describes Dr. Yersin as “Benefactor and Humanist, Venerated by the Vietnamese People.”

A Physician Who Devoted his Entire Life to Study Science