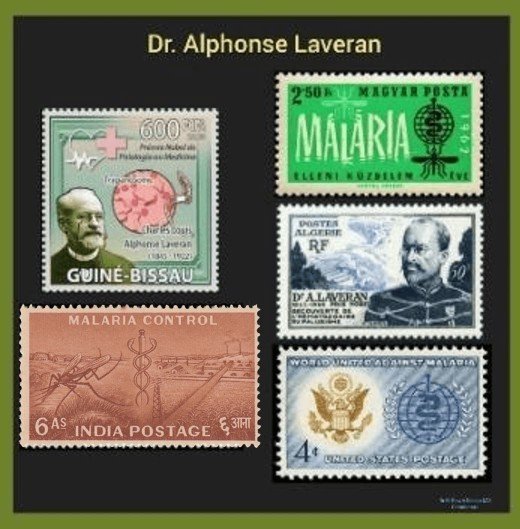 🔸Laveran’s father was a military doctor. He was inspired by the way of his father’s life. Hence, he joined to study medicine in Public Medical School at the University of Strasbourg and graduated in 1867.

🔸After his studies, he joined the military service. Initially he served as an Ambulance officer during the civil war. Suddenly, he was arrested and became a Prisoner of War. While he was imprisoned, he observed that the infectious disease spread among the soldiers.

🔸Later he was moved to serve in military hospital, Algeria, where he witnessed many soldiers and civilians die due to Malaria fever. He had conducted autopsy in patients and found Black Granular Microscopic Bodies in the blood and in the internal organs such as brain, liver and spleen.

🔸On November 6, 1880, while examining blood smear, he had noticed the malarial parasite and also spotted the same organism in 148 out of 192 cases he examined.

🔸In the year 1888, he convinced Louis Pasteur and Emile Roux regarding his new investigation of Protozoa, which was considered an etiological agent of Malaria.

🔸He further named the organism as Oscilliaria malariae (later changed to Plasmodium malariae).

🔸He also pioneered on Trypanosomes, particularly Sleeping sickness. He once again proved that protozoa was responsible for the disease.

🔸In 1907, he was honoured with the Nobel Prize in Medicine or Physiology for his discovery of the causative agent of malaria.

🔸Moreover, he voluntarily donated half his Nobel prize money to the Pasteur Institute for the Laboratory of Tropical Medicine.

🔸In 1884, he also suggested that the vector is Mosquito. Subsequently, Sir Patrick Manson, Dr. Giovanni Grassi and Sir Ronald Ross elucidated the life cycle of malarial parasite and the transmission of the disease by Anopheles mosquito.