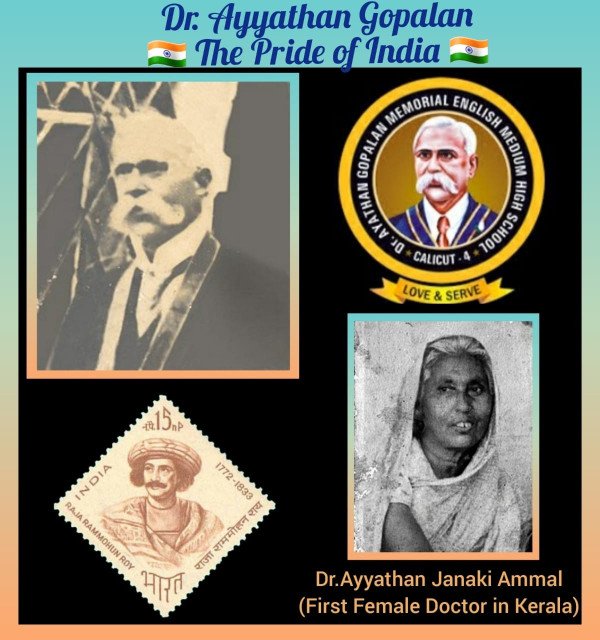 🔹Ayyathan Gopalan was born at Anjarakkandy, Thalassery in Kerala, He was the first son of Ayyathan Chandhan and Kallat Chirutha Ammal. Since his childhood, he used to oppose superstitions and caste based discrimination.

🔹In 1884, he joined Madras Medical College to study medicine. While a medical student, he was highly influenced by the principles of Raja Ram Mohan Roy’s “Brahmo Samaj.” Then he joined Brahmo Samaj movement and involved himself in various activities to promote social reforms.

🔹After completing his medical studies in 1888, he worked in several Government hospitals across South India. His wife Kallat Kausallyaammal, strongly supported the ideology of Gopalan and assisted his social reform activities.

🔹In 1897, he returned to Kerala and joined as Medical superintendent at Calicut Lunatic asylum (now the Kuthiravattom Mental Hospital). He was the first Indian to occupy this post.

🔹During 1898, he was instrumental in initiating the first branch of Brahmo Samaj at Calicut which worked towards bringing an end to caste and religious discrimination and social evils which were prevalent at that time.

🔹He constructed a hall Brahmo Mandir (now Ayathan Gopalan Memorial School) in Calicut, to conduct meetings and prayers. Also, he established similar mandirs in many places of Kerala.

🔹Further in 1900, the couple initiated the Sugunavardhini Movement and extended their social reform activities.

🔹Through this movement, they encouraged children to participate in social activities, instilled human values in children, protected the rights of women, and provided free education to girls and underprivileged communities by opening schools in Kerala.

🔹Dr. Ayyathan Gopalan was a versatile writer and translated the Holy book of Brahmo Samaj, Brahmodharma, in Malayalam (It was initially written in Bengali by Maharshi Debendranath Tagore).

🔹His social and humanitarian services were well appreciated during his times. The British Government honoured him with the highest civilian award and the title, Rao Sahib in 1917.

🔹In the annual general meeting of the Brahmo Samaj, the Nobel Laureate, poet and social reformer Rabindranath Tagore described Dr. Ayyathan Gopalan as the “Raja Ram Mohan Roy of Kerala.”

🔹Moreover, his youngest sister, Dr. Ayyathan Janaki Ammal, who was the first female doctor in Kerala, graduated from Madras Medical College in 1907 and was collaborated with Dr. Ayyathan Gopalan in promoting women’s rights.

🔹Dr. Ayyathan Gopalan lived as a true “Brahmo,” widely known as “Darsarji” also as “Darsar Sahib” (“Darsar” meaning Doctor). He was not only a great thinker ahead of his times but also a very capable physician, author, philanthropist and social reformer.