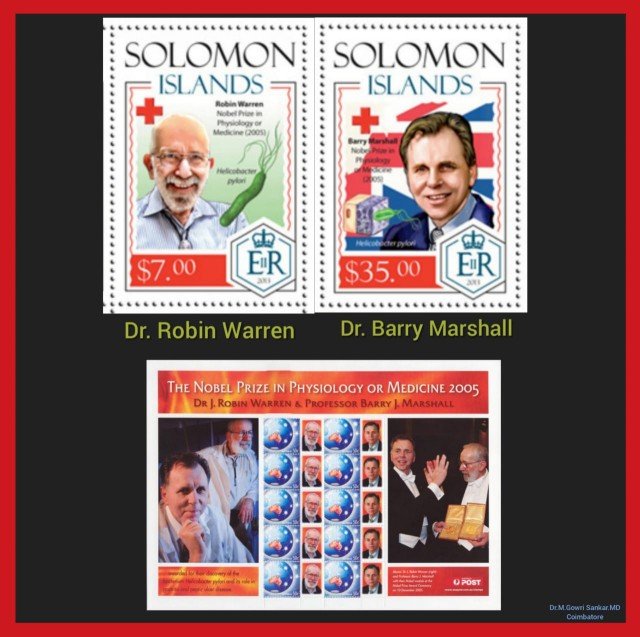 🔸Marshall had imbibed the love of medicine from his mother, who was a nurse. Therefore, he studied medicine and completed his MBBS at the University of Western Australia School of Medicine and received the graduation in 1974.
🔸After completion of his studies, he got appointed as a Registrar in Medicine at the Royal Perth Hospital. There he met Dr. Robin Warren, a pathologist.
🔸Dr. Robin Warren – on his birthday, June 11, 1979 – had found 🔬 the spiral shaped bacteria on the surface of a gastric biopsy. Subsequently, he started collecting many specimens and those related to chronic gastritis.
🔸During that time, it was strongly believed that peptic ulcers were caused only due to excess gastric acid secretion. Also, School of Teaching was that a bacteria would never survive in acidic environment of stomach. Hence, his reports got denied several times.
🔸In the year 1980, Dr. Warren & Dr. Marshall jointly researched and revealed the clinical significance of this bacteria.
🔸They further did the Clinical-Pathological study with 100 patients affected by gastric ulcer. Marshall had done biopies in those patients and Warren did pathological study.
🔸After the seven consecutive years of serious study, they proved that the causative bacteria as Helicobacter pylori by using silver stain which is responsible for gastric ulcer. It took another ten years to recognize their work in the medical community.
🔸In addition, Dr. Warren helped to develop a diagnostic test C 14 urea breath test for detecting of H.pylori in gastric ulcer patients.
🔸Finally, their extraordinary work was honoured with Nobel Prize of Medicine or Physiology in 2005 for the discovery of H.pylori bacteria and its role in gastric and peptic ulcer.
🔸Moreover, their discovery made a breakthrough in understanding the Causative link between H.pylori and Gastric cancer.

An Outstanding Physician behind the Paradigm-Shift