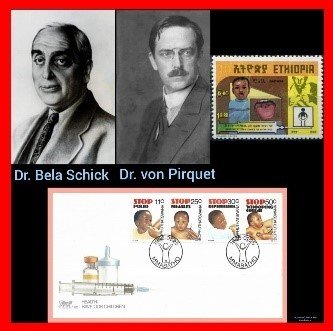 🔹After his studies, he worked with his mentor Dr. Theodor Escherich, who had discovered Escherichia coli.

🔹He also worked with Dr. Clemmens Von Pirquet in University of Children’s clinic at Vienna. This made Dr. Schick a distinguished Professor of childhood diseases.

🔹At the age of 36 years, Schick developed one of the important tests of the 20th century – the well-known Intradermal Schick test. It’s a test for susceptibility of diptheria and ultimately led to the eradication of the diptheria.

🔹In collaboration with Von Pirquet he proposed Serum Sickness, which describes a strange systemic symptom suffered after a week by diptheria or tetanus antitoxin horse serum.

🔹Subsequently, both coined the term as Allergy, which was derived from Greek word allos meaning “other” and ergon meaning “reaction” to describe the clinical reaction.

🔹He further focused on scarlet fever, tuberculosis and infantile nutrition.

🔹In the year 1932, he penned his observations related to child care and published a popular guide called Child Care Today, which also advised the children to rise against corporal punishment.

🔹Additionally, he published The care of your child from Infancy to Six in 1949 & Serum sickness in 1951.

🔹Further, he concluded “The World is Kept Alive by the Breath of Children.”

A Paediatrician Who Contributed Significantly to Children’s Health