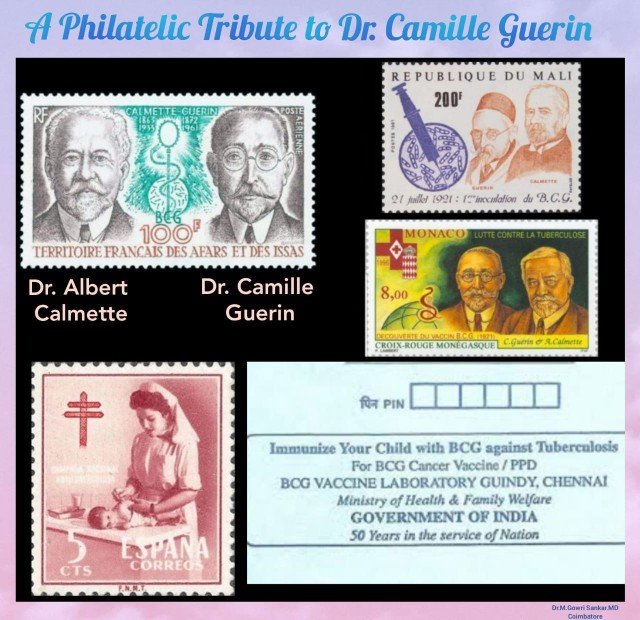 🔹Camille Guerin was from a modest family and he lost his father at his young age due to tuberculosis. After his schooling, he studied veterinary medicine and graduated at 1896.
🔹After completing his studies, he got an opportunity to work with French bacteriologist Dr. Albert Calmette at the Pasteur Institute, in Lille.
🔹Dr. Calmette was well known for his significant discoveries in the field of Toxicology & Immunology – because of developing the Antivenoms for Snake bites with usage of immune sera from vaccinated horses, which was finally called as Calmette’s Serum.
🔹The history of the BCG vaccine was born by the scientific collaboration of Dr. Albert Calmette and Dr. Camille Guerin, who developed a vaccine against tuberculosis.
🔹Initially, they together discovered that small doses of injected and weakened Mycobacterium bovis bacilli could be used as a protective vaccine against TB in cattle and various species of monkeys🐵.
🔹After this revelation, they cultured the virulent bovine bacillus and found that successive culturing weakened the bacillus.
🔹Further in the year 1921, the bovine bacillus had been subcultured for 230 times and it became avirulent strain. Thereby, they developed the BCG vaccine. It was believed that it could confer immunity without causing disease in humans.
🔹Basically, BCG is an abbreviation of Bacillus Calmette-Guerin, which means that Bacilli of Calmette and Guerin.
🔹In the year 1921, the first BCG vaccine was came into usage among humans. The usage of this vaccine continues till date and is used around the world to prevent TB infection.
🔹Later, Dr. Camille Guerin became the Director of the Tuberculosis Service at the Pasteur Institute in 1928 and was the Chairman of the First International Congress on BCG in 1948.
🔹In 1933, Dr. Calmette passed away. However, Dr. Camille Guerin survived long enough to witness the triumph of their work on BCG vaccine. Even after his retirement, he worked as an honorary director in the Pasteur Institute, Paris and died at the age of 89.