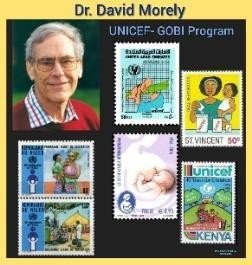 🔸After his studies, he dedicated himself to cure health care problems in developing countries.

🔸Hence, he went to Africa in 1956 and started his career as a Paediatrician in Nigeria. Further, he started a service center there for village children.

🔸Basically, he was a good innovator. He developed a Double ended plastic spoon designed in such way that the small end was for salt and the big end was for sugar. This helped mothers in preparing accurate oral rehydration solutions at home.

🔸He also developed Under Five Clinic and the Road to Health Chart, which is a growth chart to monitor child’s weight and to detect early malnutrition. This is being universally used today.

🔸Moreover, he was the first to introduce Mid-arm circumference, which is used to measure malnutrition in rural settings.

🔸He also introduced the robust weighing scale which could be used by parents to measure child’s weight.

🔸Additionally, he introduced the technique of sterilizing water by placing it in sunlight.

🔸Subsequently, he was the first who introduced the Early trials of Measles vaccine and started with his own children.

🔸Moreover, he established a charity and implemented Teaching Aids at Low Cost (TALC), thereby distributing a set of health-related training materials in the form of slides, books & CDs for all cadres of heath care workers in the developing countries.

🔸He was an instrumental in focusing on Primary Health Care, which was later accepted by the International community at Alma Ata in 1979.

🔸He had proved that Infant mortality rate could be reduced by 80% not by modern medicine and medical infrastructure but by education and by use of locally available resources.

An Idealist Who Practiced What He Preached