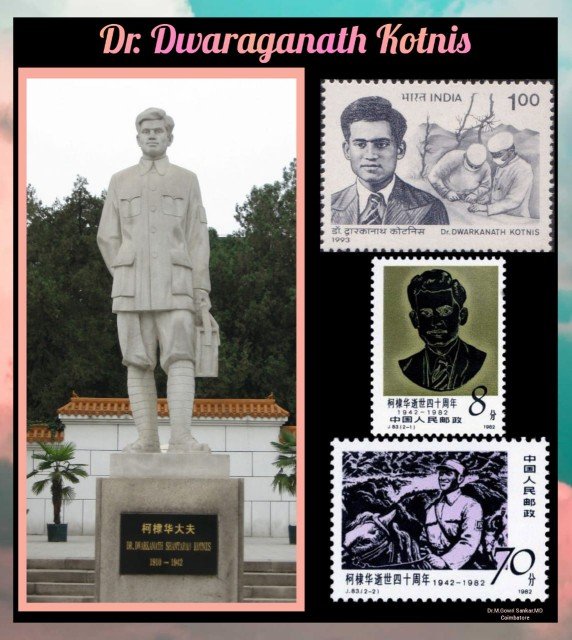 🔹Dwarkanath Kotnis was born at Solapur in Maharashtra. He studied medicine from the Seth G.S. Medical College in Mumbai.
🔹In the year 1938, Japanese invaded China, which led to the Sino-Japanese war.
🔹During the war, China suffered huge casualties. This terribly worried the communist General of China Zhu De. Hence, he came forward and requested our Indian leader Jawaharlal Nehru to send some physicians from India to rescue their soldiers.
🔹Due to the request, the President of Indian National Congress Netaji Subhash Chandra Bose arranged a team of volunteer doctors, ambulance and an offering fund of Rs 22,000 to China.
🔹Among the five volunteers of the medical team, 28 years old Dr. Kotnis was there. They were sent to China as the Indian Medical Mission Team in September 1938.
🔹Dr. Kotnis stayed in China, worked as a battlefield doctor and rendered his selfless service to injured soldiers at war field.
🔹Additionally, Dr. Kotnis joined with the Eighth Route Army, which was led by Mao Zedong near the Wutai Mountain Area 🏔. After their extreme efforts, they reached Japanese aggressed northern China region to treat the wounded soldiers.
🔹There his role was a battlefront doctor, which was very stressful as there would always be an acute shortage of medicines and man power.
🔹At one point, Dr. Kotnis performed surgeries for continuous 72 hours, without getting any help and sleep. Thus, he saved more than thousands of wounded soldiers in the battle.
🔹After the war, he stayed back and served at the military base. Following the sad demise of Canadian Physician Dr. Norman Bethune, Dr. Kotnis was appointed as the Director of Dr. Bethune International Peace Hospital, Shijiazhuang city, China.
🔹Dr. Norman Bethune had also served as a battlefield frontline surgeon in Sino-Japanese war and saved thousands of soldiers. Further, he had brought modern medicine to China.
🔹During his service in Bethune Hospital, Dr. Kotnis met Guo Qinglan, a nurse at the Bethune Hospital. They fell in love and got married. They named their son Yinhua – combining the Chinese characters, Yin for India and Hua for China.
🔹Unfortunately, Dr. Kotnis had a series of epileptic seizures, and succumbed to death on December 9, 1942.
🔹Upon his death, China’s communist leader and revolutionary hero Mao Zedong, mourned his death –
“The army has lost a helping hand, the nation has lost a friend. Let us always bear in mind about his Internationalist spirit.”
🔹In order to cherish the memory of Dr. Kotnis, the Chinese government laid his statues and built a memorial hall in Shijiazhuang city in 1976. Moreover, both China and India released his illustrated stamps in 1982 and 1993 respectively.
🔹His selfless service came to limelight after his best selling biography One Who Never Returned in 1945 and the Bollywood classic movie Dr. Kotnis ki Amar Khani in 1946.
🔹Ultimately, his dedication and humanitarian work in foreign land made Dr. Kotnis an immortal. He has been considered an example for China-Indian Friendship.

A Proud Son of Mother India