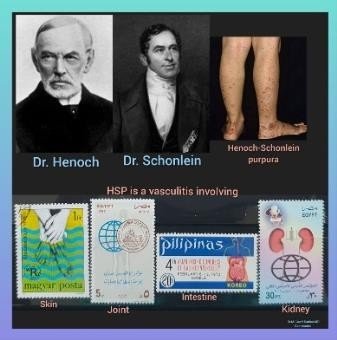 🔸Henoch studied medicine in Berlin University and graduated in 1843. There he was a Pupil of Dr. Johann Schonlein.

🔸After his studies, Dr. Henoch focussed his practice in treating diseases related to children.

🔸He also worked as an assistant at the Neurological clinic which was run by his uncle Dr. Moritz Romberg (Famous for his Romberg’s Sign).

🔸Dr. Henoch was recognized as a wise clinician and his qualities were rewarded with Professorship in the Berlin University.

🔸He is famous for his eponym…

🔸His teacher Dr. Johann Schonlein (1793-1864) was a Professor of Pathology and Medicine in Germany. He was the first to recognise, in 1837, the association called as Purpura rheumatica between arthralgia and purpuric rashes in a child. Also, he described the Renal involvement citing “frequent precipitates in the urine” of the patients.

🔸Subsequently, in 1863 Dr. Henoch described a case report of 15-years-old adolescent who appeared with purpuric rash.

🔸Later in 1874, he extended his research and published a case study on children describing that the Syndrome of Purpura consists of arthralgia and gastrointestinal manifestations of abdominal colic and melena.

🔸Thus the disease description was finally named after both Teacher and Student and thereby the concept continues in medical history till date.