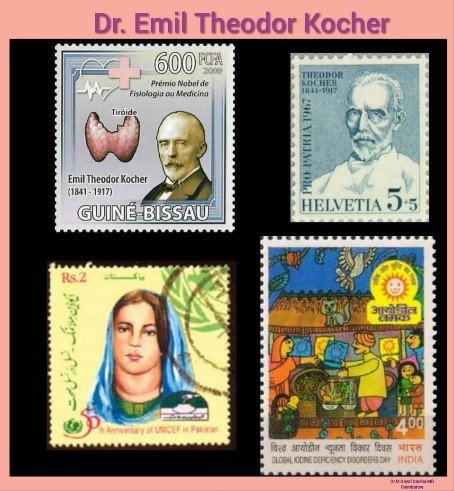 🔸Kocher studied medicine at the University of Bern, Switzerland and received his graduation in 1865.

🔸After completion of his studies, he visited various leading surgical clinics in Berlin, London, Paris and Vienna in order to gain surgical knowledge. Also, he was a student under Prof. Theodor Billroth.

🔸In 1872, Dr. Kocher became a Professor of Clinical Surgery at Bern and served there for around 45 years until his retirement.

🔸He did his experimental work on thyroid and subsequently, improved the thyroid surgery through his anatomical knowledge, precise operating technique and the aseptic principles defined by Sir Joseph Lister.

🔸In the year 1876, Dr. Kocher became the first surgeon to excise the thyroid for Goitre.

🔸He was also recognized as a Man of Discoveries. His list of eponyms is…

🔅 Kocher’s incision II – Transverse incision in the neck for thyroidectomy.

🔅 Kocher’s method I – Fixation of the fundus uteri to the abdominal wall.

🔅 Kocherisation– Operative technique in opening the duodenum to expose the ampulla of the CBD.

🔅 Kocher’s syndrome – Splenomegaly with or without lymphocytosis and lymphadenopathy in thyrotoxicosis.

🔸In the year 1912, Dr. Kocher performed around 7,000 thyroid surgeries and also reduced the thyroid surgery related mortality from 18 percent to less than 0.5 percent.

🔸Moreover, he published his experience as The Text Book of Operative Surgery in 1892.

🔸Consequently, he was honoured for his enormous contribution in thyroidology with Nobel Prize of Physiology or Medicine in 1909. Therefore, he was the first Swiss citizen and the First Surgeon, who received the Nobel Prize. Further, he donated his prize amount to Bern Institution.

🔸Eventually, he became a celebrated pioneer who taught around 10,000 medical students and became a world leader in the surgical revolution of the late nineteenth century.

An Outstanding and Immortal Surgeon