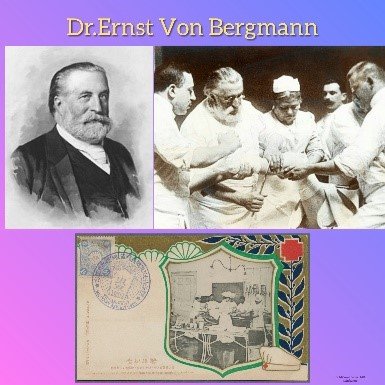 🔸Bergmann did his medical studies at the University of Dorpat, Vienna and earned his Doctorate in 1860.

🔸Subsequently, he got trained in surgery. Then he went on to serve as a Military surgeon in German civil war from 1866-1878 and thereby gained experience in treating Cranial injuries and Gunshot injuries.

🔸In fact, he was one of the first to treat the wounds by antiseptic methods which was just introduced by Sir Joseph Lister.

🔸Afterwards, he got appointed as the Professor of Surgery at University of Dorpat and later he spent his days at the University of Berlin.

🔸Furthermore, Dr. Bergmann pioneered many surgeries such as…

🔸In addition to his contributions to surgery, Dr. Bergmann is noted for introducing the below…

🔅Heat sterilization of surgical instruments in 1886.

🔅Steam sterilization under pressure for instruments and dressing materials used for surgery.

🔸He was also an early adopter of the “White coat” and published numerous medical and surgical works including:

🔅The Classic Treatise on Head Surgeries in 1880.

🔅The Surgical Treatment of Brain Disorders in 1888.