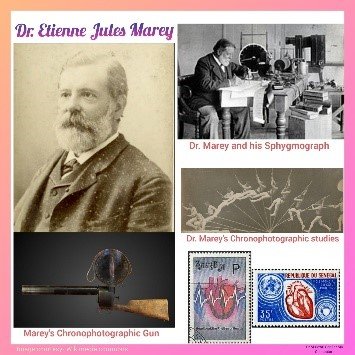 🔸Marey had a great passion for Engineering even from childhood. But his father convinced him to study medicine. So, he entered into Medical School in Paris and received his Doctorate in 1859.

🔸Subsequently, he began his medical career by doing many inventions.

🔸Firstly, he upgraded the First Multi-levered Sphygmograph designed by Dr. Karl Vierodt to a non-invasive and portable instrument which was used for Graphical recording of arterial pulse and measure blood pressure.

🔸In the year 1860, he collaborated with Dr. Auguste Chauveau, who was the Professor of Veterinary Physiology and together they pioneered a Double-lumen technique. That was the real beginning of Intracardiac pressure recording.

🔸In fact, they used the methodology of inserting double tube catheter through jugular vein directing into the heart with keeping one in the ventricle and another in atrium. Moreover, they were the first who described and illuminated…

🔅Contraction of the ventricles is responsible for apex beat not by the recoil of ventricular ejection.

🔸Those Innovative techniques were the 20th Century’s Great Contribution for cardiac cycle and cardiac catheterization.

🔸He further described about the refractory period of cardiac muscles in 1875.

🔸 Moreover, he was the first to record the electrogram of animal heart by using capillary electrometer in 1876.

🔸Later at the age of 51 years, he invented and coined the term Chronophotography.

🔸Furthermore, by using his invention of Chronophotographic Gun he captured images and then analysed the slowest and fastest movement of birds, animals and human beings.

🔸Futher, he recorded the Flight of a Pigeon at 60 frames per second – which was considered the First Motion Picture in 1888.

🔸Undoubtedly, his books are the enduring contribution for understanding the basics of cardiac physiology. His significant publications are as follows:

🔸Eventually, Dr. Marey was celebrated as a great 19th Century Cardiovascular Physiologist and laid the foundation for modern cardiology. He also pioneered the use of photography to record and analyse movement, which led to the invention of cinematography.

The Man with Scientific Dreams