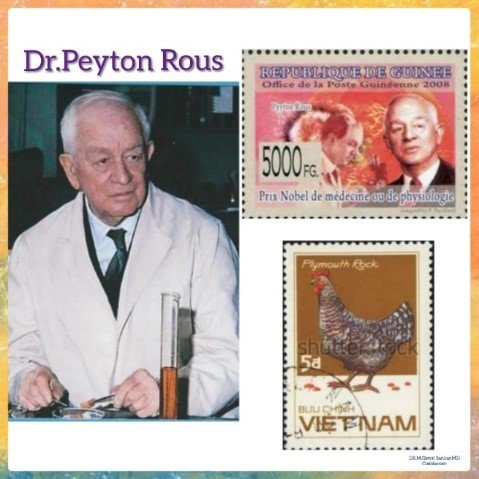 🔹Rous was born in Baltimore, Maryland in United States. He was brought up by his widow mother. He pursued his BA and MD degrees from The Johns Hopkins University in 1900 and 1905 respectively.

🔹After his studies, he joined work in the pathology department at the University of Michigan. Suddenly, he got infected by tuberculosis. But fortunately, he recovered from his illness and joined the Rockefeller Institute for Medical Research in New York, where he worked throughout his career.

🔹During the year 1911, a woman came to the Rockefeller Institute with a Plymouth Rock Chicken – a domestic breed of America – with a large tumor on its breast.

🔹 Dr. Rous initiated his research and found two seminal discoveries, which laid the foundation for modern virology and oncology.

🔅 First, he diagnosed the lump as a sarcoma and found that tumor is transmissible. He took a sample from sarcoma tissue of a hen and inoculated in to the healthy chickens. The inoculated chickens developed identical sarcoma tumor as well.

🔅 Second, he revealed that the tumor inducing factor had been caused by a filterable agent, which pass through a Berkefeld ultrafilter. By that, he suggested virus as the most likely causative agent. His mysterious agent is now known as the Rous sarcoma virus.

🔹But Dr. Rous’ Discovery of Viral Theory of Cancer created disbelief as well as controversy. Hence, he abandoned his cancer research and moved to physiological studies for next 20 years.

🔹Later in the year 1934, Dr. Rous was asked by one of the Rockefeller Institute colleagues, Dr Richard Shope to examine warts on the skin of rabbits.

🔹On the research, Dr. Rous confirmed the virus as the causative agent of warts and unraveled the mysteries of virus in causing cancer. That virus is known as Shope papillomavirus.

🔹 Subsequently, Dr. Rous and his colleagues conducted many discoveries in oncology for next 30 years including the progress of benign tumors to malignant carcinomas.

🔹Ultimately, he was honored for his masterful work with dozens of awards and honorary degrees. He also received the National Medal of Science in 1965 and the Albert Lasker Award in 1958.

🔹After the longest incubation period of 55 years in the history of the Nobel Prizes, Dr. Rous’ discovery was finally recognized and he received the Nobel Prize of Physiology or Medicine in 1966 at the age of 87.

🔹He actually dominated the recordings for forty-eight years of American medical research. Even after his retirement, he remained active at his lab bench until the age of ninety.