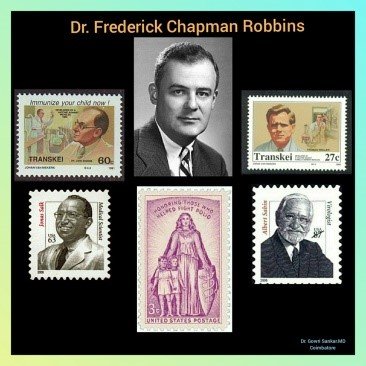 🔸During the Second World War, he was appointed as a U.S. Army Physician. He then served at various places including United States, Italy and North Africa. Wherever he served, he involved himself in the investigation of the epidemics of Infectious hepatitis, typus and Q fever.

🔸After some time, he got an opportunity to collaborate with Dr. John F. Enders and Dr. Thomas Weller in Children’s Hospital, Boston in 1948.

🔸Through their joint research they became the First to Succeed in Cultivating the Polio virus in Tissue Culture Technique by using chick embryonic skin and muscle tissues as a growth medium.

🔸Their ground-breaking discovery revealed how to grow large number of polio viruses. Subsequent to their revelation, the effective vaccine was found by Dr. Salk and Dr. Sabin.

🔸The Trio were honoured with shared Nobel Prize in Physiology or Medicine during 1954 for the discovery of polio virus – grown in tissue culture technique.

🔸Furthermore, Dr. Robbins played a crucial role as an academic leader. He was a Professor of Paediatrics and was gradually promoted to a Dean in Western Reserve Hospital.

🔸Later, he became a chairman for International Commission for Certification of Poliomyelitis Eradication in America during 1990. In the year 1996, he declared that polio was eradicated from the continent.

The Most Distinguished Medical Scientist