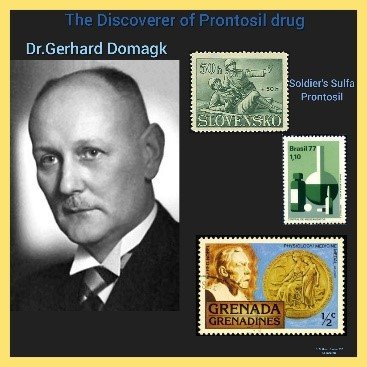 🔹While Domegk was studying medicine at the University of Kiel, he volunteered himself to serve as a soldier in World War I. At the same time, he was also a physician in the war field.

🔹In the war field, he found civilians and soldiers who were severely suffering from cholera, dysentery, typhus diseases and also he witnessed amputations due to gas gangrene.

🔹After the war, he completed his medical studies and started his research at Bayer Laboratories, Germany.

🔹Even after receiving many unsuccessful results, he continued his research and finally used Red dye stuff. Eventually, his team discovered the drug and released it under the trade name as Prontosil in 1935.

🔹Prontosil became the first drug to cure bacterial infections and the era of sulfonamides began.

🔹Further, Dr. Domegk had personally used Prontosil for treating his 4-year-old daughter, who was severely infected with streptococcal infection. His research was successful as she completely recovered.

🔹In fact, Prontosil was used mostly to fight bacterial infections from 1935 to 1942. But the usage of Penicillin during World War II shifted the focus away from Prontosil and the sulfa drugs.

🔹Even before such changes happened, Dr. Domagk and his team had turned to new area of ​​research in combating tuberculosis. They contributed to the discovery of new Anti-tuberculosis drugs cush as Thiosemicarbazone and Isoniazid to combat tuberculosis.

🔹He also launched the 10% Zephirol (benzyl ammonium chloride) – a skin disinfectant being used till date to disinfect hands and instruments.

🔹Ultimately, he was honoured with the Nobel Prize in medicine in 1939 for his discovery of the first sulfa drug.

🔹But unfortunately, he was unable to receive the Nobel Prize at the time because German scientists were not permitted to accept the prize as per their Nazi German’s policy.

🔹Finally in 1947, Dr. Domagk travelled to Stockholm, Sweden to accept his award. On his prescient speech in his Nobel Prize Ceremony, he warned of the risks of antibiotic resistance.

🔹Moreover, Sir Alexander Fleming summed up Dr. Domagk’s performance as “Without Domagk, no sulfonamides! Without sulfonamides, no penicillin! Without penicillin, no antibiotics.”

A Physician with Scientific Curiosity