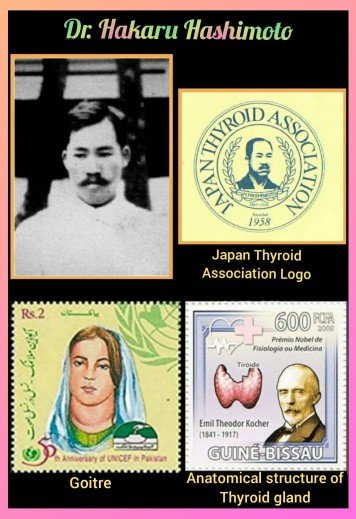 🔸Hakaru Hashimoto was born in a small village called midai in Japan and he was the son and grandson of physicians.
🔸Sadly, he lost his two elder brothers during his childhood and he lost his father when he was in high school.
🔸His family profession and early sad demise of his father and brothers made him study medicine at Fukuoka medical college of Kyusyu Imperial University and got his graduation in 1907.
🔸After his studies, he got trained in surgery under the guidance of his surgery professor and graduated in 1912.
🔸During his surgical training, he had seen four cases of new type of goiter. He started examining their thyroid tissue samples and then discovered the new pathological changes, which were never reported before.
🔸By his histopathological studies, he described the four histologic characteristics of this new type goiter:
🔅First, the infiltration of lymphocytes and formation of lymphoid follicles.
🔅Second, the marked changes in the thyroid epithelial cells.
🔅Third, the extensive formation of new connective tissue.
🔅Finally, the diffuse round cell infiltration.
🔸As the gland has predominantly infiltrated with lymphocytes and lymphoid follicles, he named the condition as Struma lymphomatosa.
🔸Subsequently, Dr. Hashimato published his 30 pages classical monograph of Struma Lymphomatosa in a German surgical journal under the guidance of his Surgery Professor in 1912.
🔸In his monograph, Dr. Hashimato elaborated the clinical presentation of a four middle aged women and their histological findings and its illustrations.
🔸During his period, Germany was considered a mecca of scientific medicine, so he moved to Goettingen University and got trained in pathology.
🔸However, Dr. Hashimoto was forced to return to Japan on the onset of the First World War. In fact, he took this opportunity to start his family practice and serve as a general practitioner in his hometown.
🔸There he practiced medicine as well as surgery and treated all the patients equally irrespective of their status. He served with the principal of “Medicine is a benevolent art.” He rode hospital rickshaw and travelled great distances across the mountains and many places to treat patients.
🔸Though he was a celebrated physician in his native place, he contracted enteric fever and succumbed to the illness at his 52 years of age.
🔸However, his epoch making discovery caught little attention in the field of medicine during his life time.
🔸But during the year 1950, his work came to lime light after many case presented with goiter with characteristic histopathological findings as suggested by Dr. Hashimoto. It is referred as Hashimotos thyroiditis in United States and European countries.
🔸After the discovery of the presence of autoantibodies in serum of Hashimotos thyroiditis, the Hashimotos disease was recognized as the first autoimmune disease in 1950’s.
🔸Today, Hashimoto’s thyroiditis or chronic lymphocytic thyroiditis or autoimmune thyroiditis is the commonest thyroid disease worldwide. In fact, Dr. Hakaru Hashimoto’s discovery laid the foundation in the history of medicine of autoimmune disease and endocrine disorders.
🔸As a mark of respect of Dr. Hashimoto, his portrait is used in the logo of the Japan Thyroid Association.