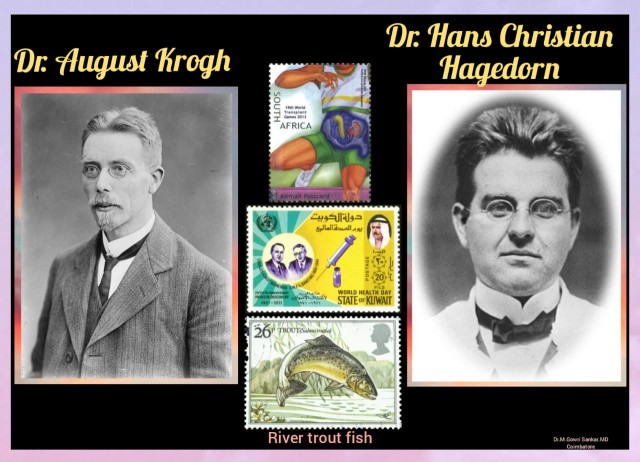 🔸Hagedorn was born in Copenhagen. After his medical studies, he was well interested in research activities rather than clinical practice.
🔸After joining with his pharmacist friend Norman Jensen, he developed a method for measuring blood glucose levels called as Hagedorn-Norman Jensen method. This was widely used in clinical blood analysis and also in research work.
🔸Dr. August Krogh, a Danish Physician and a Nobel Laureate of Medicine, visited Canada in 1920 and obtained permission for insulin production from Dr. Banting and Prof. Dr. Macleod.
🔸After his return to Denmark, Dr. Krogh collaborated with Dr. Hagedorn and carried out extensive research on insulin.
🔸Initially they both succeeded in extracting insulin from a bovine pancreas in 1923 and started treating diabetic patients successfully with insulin and saved numerous lives.
🔸Thereafter, they established an exclusive insulin production company named Nordisk Insulin laboratorium in 1923 for mass production of insulin and started marketing their first Scandinavian insulin.
🔸Further in 1932, both initiated first diabetic hospital in Scandinavia named Steno Memorial Hospital for research and managing the diabetic patients.
🔸Being the first director of that hospital, Dr. Hagedorn also focused on diet, exercise and prevention of diabetes.
🔸In the year 1930, Dr. Hagedorn turned his interest in modifying the absorption rate of insulin.
🔸Along with Norman Jensen, he conducted an extensive research and derived an alkaline protein protamine from the sperm of river trout fish.
🔸In fact, he found that the addition of protamine to insulin causes the insulin to form microscopic clumps and in body’s neutral pH it takes longer time to dissolve into bloodstream.
🔸He named the complex as (Neutral Protamine Hagedorn) NPH insulin and created one of the great breakthroughs in the history of diabetes.
🔸Later in the year 1989, their Nordisk Insulin laboratorium merged with another existing insulin production company called Novo Therapeutic Laboratorium to form “Novo Nordisk.”
🔸In order to honour the work of Dr. Hagedorn, The Danish Society of Internal Medicine established the Hagedorn Prize in 1966. It includes the Hagedorn Medal to recognize the excellent research or development efforts within internal medicine in Denmark.