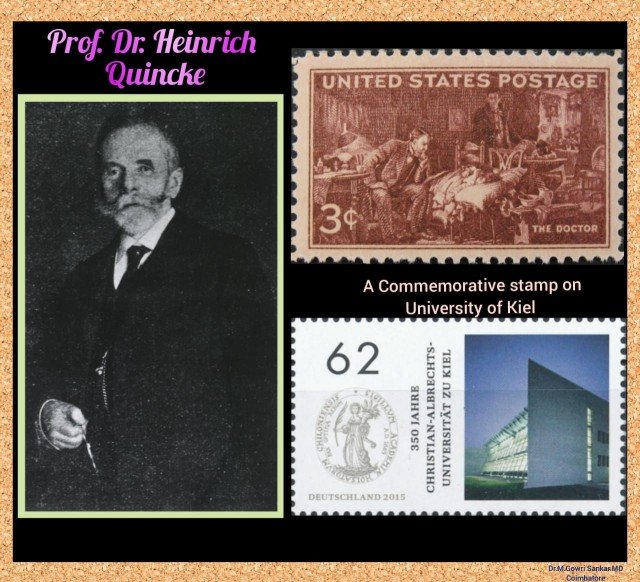 🔸Quincke was born in Germany. He studied medicine at the University of Wurzburg and Heidelberg under the guidance of Prof. Robert Virchow, Dr. Muller and Dr. Helmholtz. At the age of 16 years, he completed his medical training.
🔸Subsequently, he got trained in hospitals across Europe, such as Vienna, Paris and London.
🔸Then, he began his career as an Assistant physician at the Charite Hospital in Berlin. Later he became the Professor of Medicine in Bern, Switzerland. After that, he served as the Professor of Medicine at the University of Kiel for 30 years.
🔸All over his career, he was mostly into original observations in the field of internal medicine.
🔸His Eponyms…
🔅 Quincke’s pulse – The capillary nail bed pulsation in aortic regurgitation described in 1868
🔅 Quincke triad – Jaundice, biliary colic and gastrointestinal bleeding in a patient with a ruptured hepatic artery aneurysm who developed hemobilia.
🔅 Quincke oedema – or Angioneurotic edema or Quincke’s disease described in 1882
🔅 Quincke achorion – Causative organism of mouse favus described in 1886. Now taxonomically defined as the Dermatophyte Trichophyton quinckeanum.
🔅 Quincke puncture or Lumbar puncture – He was the first to introduce the technique of lumbar puncture for diagnostic and therapeutic purposes in 1888. With his spinal puncture technique, he specifically withdraw cerebrospinal fluid in children with hydrocephalus in 1891.
🔅 Quincke meningitis – Intracranial hypertension of unknown origin described by him in 1893
🔅 Quincke’s spinal needle
🔸In fact, Dr. Heinrich Quincke believed that lumbar puncture could be the diagnostic tool to diagnose CNS diseases. By using his spinal needle through L3/L4 interspaces, he succeeded by withdrawing the CSF fluid.
🔸Initially, he got trained by injecting red sulphide into the spinal canals of dogs and identified the CSF course.
🔸By this technique, he demonstrated the low sugar levels in bacterial meningitis and the presence of TB bacilli in tuberculous meningitis. Further, he successfully measured the CSF pressure before and after the procedure.
🔸His marvelous performance made his a celebrated teacher and clinician during his days.
🔸Unfortunately, his nomination for the 1909 Nobel Prize for his work of lumbar puncture was rejected because of the length of time, 18 years between the date of the discovery and the nomination and too old for honour at his 76 years of age.