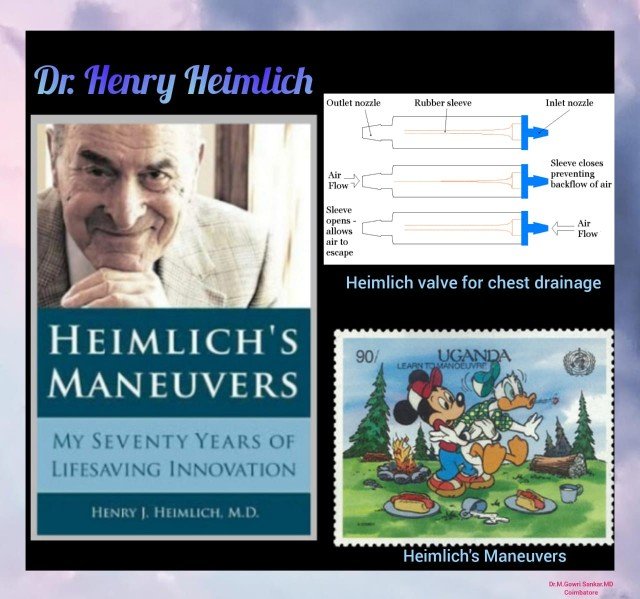 🔹Henry Heimlich studied medicine in Weill Cornell Medical College and graduated in 1943.
🔹After completion of studies, Dr. Heimlich joined to serve as the Navy Doctor of US in China during Second World War.
🔹At one particular moment in the war, he was supposed to treat a Chinese soldier, who got a gun shot injury in his chest, whereas chest surgery was in infancy at that time.
🔹Dr. Heimlich found a huge hole of 5-6 inches around the wound and then a 3-inch hole in his lungs. Although he tried many ways to rescue the patient, unfortunately, the patient expired during the final closure. This incidence haunted him for many years.
🔹Then in the year 1962, Dr. Heimlich invented the chest drainage Flutter valve or Heimlich valve. The actual design of the valve allows air and blood to drain from the chest cavity in order to allow a collapsed lung to re-expand. His invention was highly praised and moreover saved hundreds of soldiers in the Vietnam War.
🔹On one particular day, Dr. Heimlich was struck by an article, he was reading about America’s new epidemic of death by choking, which was called as “Beefsteak disease” in 1972, which occurs due to swallowing large bites of meat that had not been thoroughly chewed.
🔹Thereupon, Dr. Heimlich and his team at the Jewish hospital, Cincinnati, started working for the same for about two years and successfully developed Abdominal thrusts as the standard technique in 1974 for saving any choking victims life.
🔹Eventually, his procedure received an approval from the American Medical Association. In an article in their journal they coined the name Heimlich maneuver. Later, it was adopted by the American Red Cross and then American Heart Association, as a second-choice after back-slapping.
🔹Furthermore, he invented the Micro Trach portable oxygen system for ambulatory patients.
🔹In fact, Dr. Henry Heimlich was an innovative physician – “Committed to come up with simple and effective ideas that helped and saved many lives.”