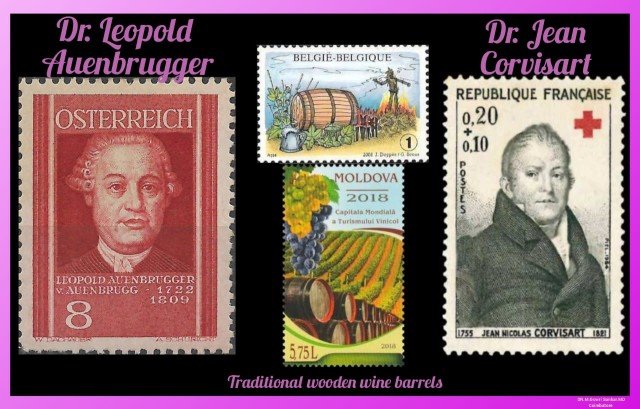 🔹Auenbrugger was born in Austria. His father was a hotel-keeper and wanted to give his son the best possible education. After completion of schooling, Auenbrugger enrolled to study medicine at the University of Vienna and graduated in 1752.
🔹After his studies, he began his career as an Assistant Physician at the Spanish Military Hospital, and then became a Chief Physician, by gaining experience in diagnosis of chest diseases.
🔹Simultaneously, Dr. Auenbrugger conceived the chest percussion method in order to judge the condition of the underlying organs based on the sound.
🔹Actually, he acquired the percussion skills from his father, who tapped the wine barrels in hotel to determine its fullness and also from his teacher Prof. Van Swieten, who would regularly percuss the abdomen to distinguish ascites from gaseous distension.
🔹Moreover, Dr. Auenbrugger was a musician. With the help of his excellent musical ear and his familiarity with tapping of the wine barrels, he developed the science of percussion.
🔹He observed that when a barrel or a normal chest was empty, he found a resonant sound on percussion. Whereas when a barrel was filled with wine or the pleural cavity was filled with an effusion, he found a different note. He also outlined the cardiac size while in normal and in diseased state by doing percussion.
🔹Subsequently, he was laying the ground work of percussion for about ten years. He further confirmed his observations on the diagnostic value of percussion by comparing with post mortem specimens and by the experimental researches on dead bodies.
🔹Furthermore, he published his observation during 1861 in a book entitled “A New Discovery that Enables the Physician from the Percussion of the Human Thorax to Detect the Diseases Hidden Within the Chest.”
🔹Alike most of the medical discoveries, his method of diagnosis was also largely ignored for 50 years.
🔹However, Dr. Jean Nicolas Corvisart, a favourite physician of French Emperor Napoleon Bonaparte, brought back Auenbrugger’s percussion technique and made it world famous. He translated Auenbrugger’s book from Latin to French and published it in 1808, the year before Auenbrugger’s death.
🔹This diagnostic method gained worldwide acceptance and it still remains an important procedure in bedside diagnosis and the birth of the modern physical examination.
🔹His Eponym…
🔅 Auenbrugger sign – The bulging of the epigastric region in cases of extensive pericardial effusion.
🔹In fact in the history of science, most of the inventions are based on earlier observations. However, Dr. Auenbrugger functioned with his own observations under his father and his teacher.
🔹Later his innovative Chest percussion became a diagnostic technique. On the strength of this discovery, he is celebrated as One of the Great Founders of Modern Medicine.

The Pioneer Physician and the Founding Father of Chest Percussion